Save the Date for the 2022 Annual Meeting

*Please note the date change from what was in the printed edition of the newsletter.

This summer, the Historical Society supported the tour of historic Brethren in Christ churches in Kansas during the 2022 Brethren in Christ U.S. General Assembly. Meanwhile in Pennsylvania, the board of trustees of the Ringgold Meetinghouse in Maryland is engaged in a project to create a digital record of the meetinghouse (see next story).

We hoped to create a video of the Kansas church tour to be shown at our 2022 annual meeting in September. However, that wasn’t possible, but there will be some reflections from General Assembly. We will share the results of the meetinghouse digitization project. With new technology available that our forefathers and foremothers could not have imagined, we are able to create and share events that most of us are not able to attend and preserve historic buildings and records for future generations. Plan now to attend the annual meeting on Friday, September 23, 2022, at the Fairview Avenue Brethren in Christ Church, Waynesboro, PA. and watch for more information about how to register.

Creating a Digital Scan of the Ringgold Meetinghouse

Recently, Stephen Long, PLS, a land survey supervisor for Montgomery County, Maryland, began to survey the property of the historic Ringgold Meetinghouse in Smithsburg, Maryland. The survey will help determine the property boundaries. Steve then took an interest in the building itself and began creating a 3D digital scan.

The laser scanner, on a large tripod, rotates slowly in place, taking digital scans as well as hundreds of panoramic photographs. Each area of the building, inside and out, is scanned in this way. When complete, the scans and photos will be stitched together to form a 3D model of the meetinghouse as a permanent shared historical record of the building. After completion, you will be able to do a virtual walk-through or flyover of the building. We hope the model will be used for both public interest and historical education for many years to come. To see our progress with the project, check in regularly on the Facebook page, “Ringgold Meeting House.”

Thanks to the generosity of Lester and Mary Fretz, the Karn organ pictured here is now in the Be in Christ Church of Canada Archives in Port Colbourne, Ontario.

The organ was first used by the Brethren in Christ in Saskatchewan when it was in the local Aude school, near Kindersley. In 1917, the Clearview Church was built nearby, and the organ was used there. Morris Sider estimates that the use of musical instruments in Brethren meetings was accepted much earlier in the mission outreach areas of the church (Chicago Mission, Houghton Mission, North Star Mission, etc.). Later the organ was moved to the North Star Mission, then to the Paddockwood church, and finally, into the former Prince Albert church.

A generous donation by Lester and Mary Fretz during a fund-raising event at the Prince Albert church brought the organ to Ontario. The Fretzes had the organ in their home. After Lester passed away, Mary asked to have it moved to the Canadian Archives which had always been their intent. We hired a piano moving company to move the organ. Our thanks to Mary for storing it for these years. The organ had been built in Woodstock, Ontario by the Karn Organ Company, and I continue to do research about the company.

Leonard Chester is the Canadian representative to the Brethren in Christ Historical Society and the archivist for Be In Christ Church of Canada.

From July 5-10, 2022, thousands of Anabaptists from around the world—including many Brethren in Christ—gathered in Semarang, Central Java, Indonesia, for the seventeenth assembly of the Mennonite World Conference (MWC).

The assembly event, which occurs every six years, brings together brothers and sisters from a variety of Anabaptist-related denominations for multiple days of worship, learning, reflection, and fellowship.

Brethren in Christ have participated in Mennonite World Conference (MWC) since at least 1952, when the North American church sent E. J. Swalm of Canada to represent the denomination at MWC’s fifth assembly in Basel, Switzerland. According to the General Conference Minutes, Swalm was dispatched to represent “Brethren in Christ relief interests . . . and to make further study of missionary possibilities in Palestine.”1 (After the assembly in Europe, Swalm traveled with a group of fellow Anabaptists to the Middle East.) Swalm would later reflect in the Evangelical Visitor: “It is thrilling to meet so many people from different countries of the world. Speaking varied languages yet meeting in the name and fellowship of the Lord Jesus Christ. Modern inventions have made it possible to hang a receiving apparatus on our neck and tune in on any translation we wish as all speeches are simultaneously translated from the control room. Thus every man [and woman]—as at Pentecost—understands the message in the language wherein he was born.”2 Swalm would also attend the sixth assembly in Karlsruhe, West Germany, in 1957.

Two decades later, six Brethren in Christ delegates from around the world met in Curtiba, Brazil, for MWC’s tenth assembly. Attendee J. Wilmer Heisey from the United States, then serving as executive secretary of the Board for Missions, reflected on the event in the pages of the Visitor: “With a touch of the unexpected in nearly every activity, this world gathering felt the wind of the Spirit . . . in such a way that no individual or party could dominate or control. The diversity of the disciples who met at the Lord’s table at Curtiba was a powerful reminder of the environment around the throne of the King of Kings.”3

These snapshots from various MWC assemblies demonstrate how, in a very visible way, Brethren in Christ members have been engaged in this international fellowship of Anabaptist-related churches. 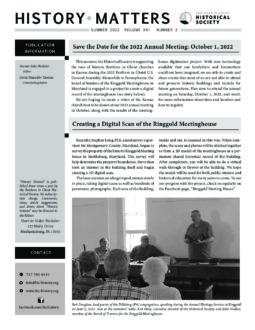 View the Summer 2022 newsletter in PDF