Changes at the Brethren in Christ Archives 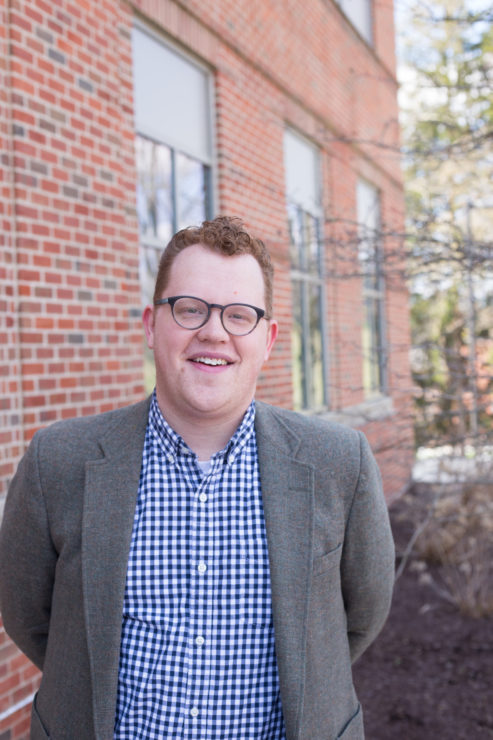 The Brethren in Christ Historical Library and Archives, located on the campus of Messiah College, is under new leadership starting this year.

Devin Manzullo-Thomas (pictured at left) has accepted a new role as Director of Archives. In this position he supervises all the archival collections housed at the college, including the Brethren in Christ Archives. The other archives on campus are the Archives of Messiah College and the Ernest L. Boyer Center Archives. Devin previously served as the archives coordinator for the Boyer collection. He has also served since 2013 as director of the E. Morris and Leone Sider Institute for Anabaptist, Pietist, and Wesleyan Studies, which is also headquartered at the college.

As indicated above, this change in leadership is part of a broader reorganization of all the archives housed on Messiah’s campus. By merging the oversight of all three archives collections under one director, the college hopes to create opportunities for operational and administrative efficiencies. The merger will not change the unique identity and collecting policy for each collection.

This is also a good time to remind readers of the distinctions between the Brethren in Christ Historical Library and Archives and the Historical Society, and who to contact about each. If you have research questions or materials to donate to the Archives, contact Devin ([email protected]); if you want to buy books, become a member of the Society, or subscribe to Brethren in Christ History and Life,  contact Harriet Bicksler.

Just in Time for Christmas

The Historical Society has established an account on Amazon.com where we can sell our books. Eventually, all books in our inventory will be available for sale online, although right now the selection is limited to more recent books, including Stories and Scenes from a Brethren in Christ Heritage, by E. Morris Sider, and Blest Be The Tie That Binds: Studies in Global Brethren in Christ Faith and Culture, by Dwight W. Thomas. You can search on Amazon for a specific title, or you can go to the Books page of our website, select a title, and be directed to Amazon where you can purchase the book.

To help us save postage and more efficiently and regularly communicate with our members and others who are interested, we would like to encourage you to sign up for our email list. You can send your request to be included in the list to our executive director, Ken Hoke. We promise not to overwhelm you with emails and we won’t share your address.

I was privileged to receive a complimentary copy of the second edition of the history of the Brethren in Christ Church in Canada: Be in Christ. A Canadian Church Engages in Heritage and Change, by E. Morris Sider. When, in perusing the book, I arrived at page 154, I was startled to see a photograph of my father, Earl Sider, featured along with three others as evangelists of the 1940s and earlier. I was startled not only because it was a photograph of which I had no recollection, but primarily because the face reflected not the evangelist, which indeed my father was, but the man I came to know as a humane and cultivated individual, who brought to his faith an effective awareness of the Christian church as a living tradition extending back to its foundation, and of which he was an integral part.

Perhaps nothing reflected better my father’s sense of his connection with the historic tradition of Christianity than chance remarks in his sermons. As a “preacher’s kid,” I sat in a front-row pew with my siblings and mother, an ideal spot to attend to the sermon. His quotations from and references and allusions to the saints and events of the past, remain firmly in mind; I recall a few of them here:

I have no reason to think that my father had read deeply in history; these were images he had picked up, perhaps even incidentally, but he had clearly absorbed them into his intellectual life, and they found an integral place in his experience of faith and became an almost spontaneous utterance as part of the word he preached.

My father was not a theologian, but he was by no means averse to theology. While he identified as a “Wesleyan,” his taste for biblical exposition and theological discourse was hardly discriminate. He was fond of the commentaries of the seventeenth-century Matthew Henry. He liked Anglican theology: on one occasion in a sermon he told his congregation that he found the commentaries of Anglican theologians profitable.

In his later years he joined a religious book-of-the-month club. I saw on his shelf not only the books of evangelicals but the Commentary on Galatians by Martin Luther and the book by the distinguished Presbyterian, George Arthur Buttrick, Christ and Man’s Dilemma, a splendid exposition of Christ as the source of hope in the reconstruction of the world after World War Two.

My father’s religious home was the Brethren in Christ Church, which he loved and served with a  devotion that enabled him to move with the changing doctrines and practices of the church. But his spiritual homeland was the community of Christians bound together in a tradition that extended across the ages to the origins of the faith and defied the boundaries of geography and creed. This is the man I see looking out on us on Page 154 of Be in Christ.

Robert D. Sider is the fourth child of Earl and Elsie Sider and grew up in the Brethren in Christ Church in Ontario, Canada. Following study at Oxford University, he taught for many years at Messiah College and  Dickinson College, both in Pennsylvania, and since 1996 has been an adjunct professor at the University of Saskatchewan. He and his wife Lura Mae have been married for 60 years and have three children, nine grandchildren, and two great-grandchildren.

Hispanic Ministrues in the United States: Preserving an Important Story

Recently, in my new role as Director of Archives (see first article), I received an inquiry from the Southeast Regional Conference of the Brethren in Christ U. S. They were seeking information about the origins of Brethren in Christ outreach efforts among Hispanic communities in the United States, especially in South Florida.

The request sent me on a fascinating journey through the Evangelical Visitor. It also revealed how little of this story is preserved in our collection!

The 1978 Brethren in Christ General Conference (now General Assembly) authorized the Board for Missions to “pursue the opening of new mission ministries” among “ethnic groups” in North America. The first “ethnic group” chosen for evangelism and outreach were Hispanics. By that time, the Hispanic population of the United States had begun to swell. In the 1980s, for instance, there were more than 760,000 Cuban immigrants living in the country. Waves of immigration from Central and South American countries would draw more Hispanics to the U.S. during that decade. These demographic shifts drove the Brethren in Christ General Conference to action.

The most successful Brethren in Christ outreach effort began in the mid-1980s, through the leadership of Eduardo Llanes. Llanes had grown up Brethren in Christ in Cuba and immigrated to the United States in the 1960s. Around 1984 he sensed a desire to re-enter full-time ministry and presented himself to the church for that purpose. In partnership with the Board for Evangelism and Church Planting and the Atlantic Regional Conference, Eduardo, his wife Jill, and their family moved to the suburbs of Miami, Florida, in the summer of 1985. There, the Llaneses began a church planting effort among the region’s Hispanic population, beginning with Bible studies in their home.

By 1992, there were five Brethren in Christ churches in the Greater Miami region, including Bethel Brethren in Christ, the congregation birthed out of those early Bible studies held in the Llanes’ living room. By 1998, about 13 years after the Llanes family first moved to the city, there were 20 congregations within this burgeoning Brethren in Christ network. Growth occurred not only through the planting of new churches but also through the adoption of existing (non-denominational) congregations. In response to this dynamic and rapid growth, in 1998 the General Conference appointed Llanes as a “staff person” on the Leadership Council “to assist in the growth of our Hispanic ministries.” By 2004, he had become associate bishop for Hispanic ministries in the Atlantic Conference, serving alongside Bishop Craig Sider (administrative bishop) and Bishop John Byers (associate bishop for Anglo congregations). Two years later, in 2006, he was appointed bishop of the newly formed Southeast Regional Conference by the General Conference. By that time, Miami was home to the third largest concentration of Brethren in Christ congregations in North America (after Pennsylvania and Ontario, Canada), with 38-eight congregations, most of them Hispanic. As a denominational publication from that time reported, as a result of the growth of Hispanic congregations in South Florida and throughout the country, on any given Sunday one-sixth of the Brethren in Christ churches in the United States were conducting their worship services in Spanish.

This story is a fascinating and important part of our history as Brethren in Christ. Unfortunately, we have almost no records, beyond what’s available in the Visitor and General Conference Minutes, to document it! The Archives staff would be delighted to receive any materials—oral histories, photographs, minutes, and more—that would provide additional insights into these pivotal years in the growth of our Hispanic congregations.

Images of the Past 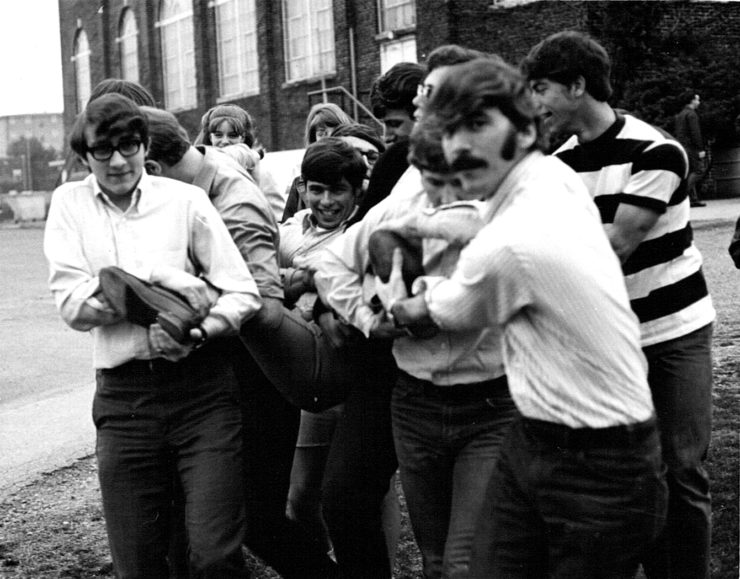 This photo, taken in 1969 or 1970, showcases a tradition familiar to anyone who got engaged during their student days at Messiah College. Young men would celebrate a friend’s successful marriage proposal by carrying him—often kicking and hollering—to the banks of the Yellow Breeches Creek and pitching him into the water—a ritual called “creeking.”

Were you “creeked” during your Messiah College years? If so, share your story with us.

Correction: The “Image from the Past” in the Summer 2019 edition was misidentified. Instead of being a photo of the Bethel church in Virginia, it is a photo of a work group from the New Guilford church in front of the Iron Springs church, both in Pennsylvania. We apologize for the error and urge all those who submit photos to the Archives to label photos to the best of their knowledge. 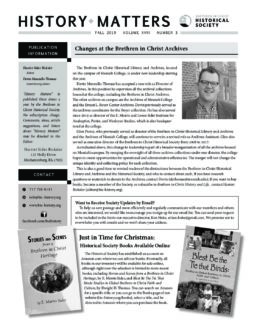