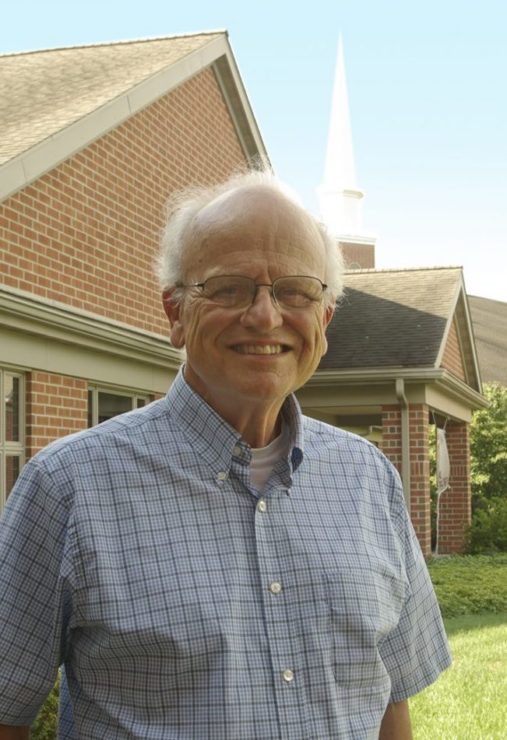 At its September meeting, the board of the Brethren in Christ Historical Society elected Dr. John Yeatts as our new president, succeeding Dr. Emerson Lesher who served as president for 15 years from 2005-2020. John will assume his new office on January 1, 2021.

John has been a member of the board since 2012, assuming the vice presidency this past year. He is professor emeritus at Messiah University and senior pastor emeritus at the Grantham Brethren in Christ Church. He teaches the core course for the Brethren in Christ U.S. on “Brethren in Christ History and Values.” He and his wife Amy have two married adult children and five grandchildren. They live in Mechanicsburg, Pennsylvania. Upon accepting the affirmative vote of the board, John said that he would like to work himself out of a job by recruiting and mentoring younger members to join the Society and assume leadership roles—something he has done successfully in other roles.

The board thanks Emerson for his distinguished service to the Society and for his commitment to ensuring that the Brethren in Christ Church not forget its history even as it moves forward with optimism into the future.

Reflections on Being President for 15 Years

When I joined the Board in 2005 we met in Morris and Leone Sider’s living room and at the end of the meeting had homemade pie, ice cream, tea, and mixed nuts. After Morris stepped down, we met in a conference room at Messiah Lifeways with water and trail mix, and since COVID-19 we’ve been meeting via Zoom!

Over the last 15 years, there have been a number of changes in the Society, including but not limited to the following:

In the midst of these organizational changes the Society continued to publish Brethren in Christ History and Life, History Matters, and occasional books. We also held an annual meeting, the Annual Heritage Service at the Ringgold Meetinghouse, and occasional special programs. The Society maintains a healthy financial base to support its work.

As I end my service as president, I see several ongoing challenges for the Society: moving more completely to a digital platform to share the work and resources of the Society; considering how to broaden our identity as an organization beyond North America; engaging younger leaders; connecting more our three participating denominations (Brethren in Christ US and Be In Christ Church of Canada, Old Order River Brethren, and United Zion; being a resource and an advocate for research and interpretation of past and future; financially sustaining a membership society; and finding thoughtful, capable, and willing writers.

Researching Race and Racism in the Brethren in Christ History

Over the last several months, national events—including the murders of George Floyd, Breonna Taylor, and other African Americans by police officers—have precipitated a national conversation about race, racism, and white supremacy in the United States. For many Christians, including some Brethren in Christ, this national conversation has led to thoughtful and theologically reflective considerations of the role of the church in racism and white supremacy. As a result, over the last several months the Archives has received several inquiries from pastors and lay leaders about the Brethren in Christ’s views on race and involvement in slavery, abolitionism, the civil rights movement, and more. This article shares some of the discoveries made by Archives staff as they responded to these research requests.

Unfortunately, the Archives has few records documenting the history of the Brethren in Christ (or River Brethren, as they were known prior to the late nineteenth century) before the 1870s. Therefore, we have little knowledge about what Brethren in Christ thought about slavery or about abolitionist movements to end the unjust and inhumane enslavement of human beings.

We do know that at least some of our Anabaptist ancestors who came to the United States from Europe expressed their opposition to slavery as early as 1688. In that year, three Philadelphia Mennonites (who by that time were worshipping with Quakers due to a lack of Mennonite ministers in the New World) signed a petition against slavery, in which they declared that “we . . . are against this traffic of man-body” and compared the slave trade to the obviously sinful practice of robbery: “We who profess it is not lawful to steal must likewise avoid to purchase such things as are stolen, but rather help to stop this robbing and stealing if possible.”1

There were Brethren in Christ statements against racial violence in the early twentieth century. At that time, African Americans in the South lived under the regime of Jim Crow segregation, but black Americans in the North were hardly free from racial prejudice or violence. Evangelical Visitor editor drew attention to that reality in 1911, when he condemned a “disgraceful and barbarous lynching” that had occurred in Coatesville, Pennsylvania, near Philadelphia.2 Similarly, in a 1938 article in the Evangelical Visitor, editor V. L. Stump expressed his support for an anti-lynching bill then making its way through the U.S. Congress. He wrote, “When we think of the terrible outrages that have been perpetuated upon the colored race by the white man, it staggers our imagination to even think of the great and sweeping condemnation that a God of justice will have to pass upon the white race on the great day of final reckoning.”3 That’s a pretty forceful statement!

Nevertheless, Brethren in Christ were not always champions of anti-racist sentiments. In his magisterial book Quest for Piety and Obedience, the historian Carlton O. Wittlinger points to this reality in his description of failed efforts by Kentucky mission workers to integrate their services in the 1920s. At the time, Kentucky—like the rest of the United States South—practiced legal segregation along racial lines. Though supposedly “separate but equal,” the realities were much more unjust. When they arrived to work in the Bluegrass State, Brethren in Christ missionaries Albert and Margie Engle were troubled by this situation. According to Wittlinger, at an early tent meeting the Engles conducted, black attendees stood outside while whites occupied the pews. Albert invited the African Americans to join the worship under the tent—a move that “alienated whites, who ceased attending services.” Wittlinger concludes, “Such experiences soon taught the Engles that community mores governing black and white relationships were so firmly established that an integrated mission was impossible at that time.”4 Rather than fight against the unjust and immoral customs and practices of the time, the Engles chose to accept the segregated social order and concentrated their ministry on the white community.

Even so, there were African American members of the Brethren in Christ Church as early as 1907. In that year, Rhoda Scott was baptized by Solomon G. Engle at the Philadelphia Mission. This “colored sister,” as she referred to herself, later wrote of her experience in the Visitor, stating that “I am glad to be [part of the mission family] because their treatment of me tells me they are children of God, and I love them all.”5 One wonders, in retrospect, if Scott was referring specifically to a welcoming and inclusive attitude among the all-white mission workers toward an African American in their community.

More African Americans eventually joined the church, especially after the Great Migration of millions of Southern blacks to northern cities after World War II. In East Canton, Ohio, for instance, several African American families moved into the city, including one family who in the early 1950s moved into a home directly across the street from the Valley Chapel Brethren in Christ Church. The Misners were initially hesitant about attending the church, but were willing to send their children to the congregation’s annual summer Vacation Bible School. One day, while watching VBS students play outside the church, Eunice Misner witnessed a young black boy being pushed to the ground by another child. A white teacher picked him up and kissed him. As Misner would later reflect, this gesture made a significant impression on her. Shortly thereafter, she and her family began attending the church and were later baptized as members. Eventually, more African American families would join the congregation. By 1966, one quarter of the small church was African American.6

As the total black membership in the Brethren in Christ church hovered around 100, the church as a whole took a more direct stand against racism in their support for the civil rights movement.8 In a “Statement on Race Relations” passed by a vote of the General Conference of 1963, the church affirmed that “we wish to go on record as in sympathy with the aspirations of the Negro race and to extend to them an expression of our moral support in efforts for their attainment . . . [of] racial equality which will involve also equality of opportunity.” Importantly, the church affirmed “the policy of non-violence which has been employed by certain Negro leaders.”9 A similar statement was produced around that same time by the church’s Commission on Peace and Social Concerns. Written by Commission chairman Isaac Kanode, the pamphlet “A Christian View of Race” appealed to the biblical principle of Romans 3:22 that “there is no difference” among people in Christ and warned against followers of Jesus reading “their own prejudices into the text.” It also called for the church to enact practical strategies to secure employment and training opportunities as well as fair housing for African Americans. Moreover, it urged church members to read books on race and racism to counteract ignorance. It concluded, “This is the time to eradicate prejudice in ourselves and others, not only by what we say but also by what we do.”10

These are just a few glimpses of the Brethren in Christ engagement with issues of race, racism, and white supremacy. More stories could and should be told. The Archives welcomes researchers interested in exploring this topic at greater length to use our collections. 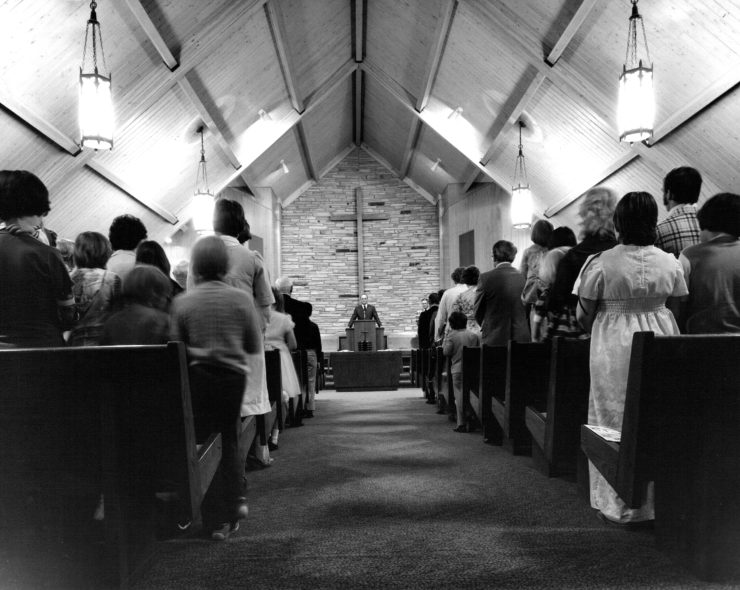 This year, the Abilene Brethren in Christ Church in Kansas celebrated its 50th anniversary in its present location at 1005 N. Buckeye Avenue. The building, pictured here, was dedicated in April 1970 with a service that included congregational singing, a short history of the congregation, a sermon from Bishop Alvin C. Burkholder of California, and a formal “transfer of the key” to the church’s pastor, Glenn A. Hensel. The new space was a major modernization from the white clapboard church in which the congregation had been meeting since the late nineteenth century, and it reflected the growing social and economic mobility of the Kansas Brethren in Christ at that time.

In his dedicatory remarks, Pastor Hensel called the building “evidence of the co-operation of many, and of the giving of time, effort, and money, along with some giving up of personal ideas in favor of others—a true symbol of working together in Christian love.” 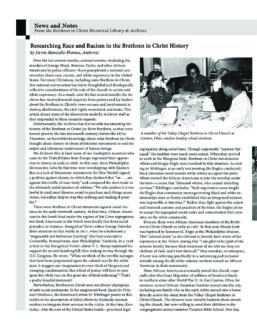