The following report from the Historical Society’s president was prepared for the annual meeting in October.

I have enjoyed immensely my participation over many years in the Brethren in Christ Historical Society.  Therefore, when asked to serve as President, my first response was that I was willing, but that it would not be a good idea for someone my age to move into that position. I did agree to serve, with this caveat: the Board of Directors should seek additional members who can give long-term leadership.

To meet this goal, I have encouraged about a half dozen persons to consider involvement in the Historical Society sometime over the next five years. They have all shown interest and are considering at what time their other commitments might allow them to be involved. If you know of persons who might contribute, feel free to contact us. The Board of Directors is hopeful and even confident that in the next five years we will have a more forward-looking Board.

In further reflecting on my involvement in the Historical Society, another concern is to stimulate more involvement from our traditional partners—the Old Order River Brethren and the United Zion Church.  With the support of the Board of Directors, I have discussed this goal with our Brother John Dietz and the board has come up with some ideas to involve the Old Order. Moreover, our executive director and I plan to soon talk with Jay Showalter of the United Zion Church [this meeting has since taken place].

A goal that is well on the way toward implementation is a collaborating partnership between the Historical Society and Zambian Christian University to promote research and publication along common interests and to share historical materials between the two groups. This partnership was approved by the Board of Directors of the Historical Society and Vice Chancellor Muchindu and Bishop Charles Nseemani of ZACU. Both institutions are excited about the possibilities of this relationship.

In conclusion, I am delighted to announce that Ken Hoke has agreed to serve as executive director for another three-year term and Harriet Sider Bicksler will continue as editor for three more years. This will give us stability as we transition to new leadership in the next 3-5 years.

We are grateful for those who serve the Brethren in Christ Historical Society in so many ways. Pray for us as we work to accomplish our goals.

The annual meeting in October featured a panel of Society members (Esther Spurrier, John Dietz, Emily Hahn, and Paul Nisly, moderated by Ken Hoke) asking E. Morris Sider questions about his new book, Brown Sugar Sandwiches and Other Stories: Memories from My Life, which was released at the meeting. At 93 years of age, Morris is still telling stories with his usual combination of wit and a firm grasp of history. You can listen to the audio of program where he reflects on his writing process and tells more stories that are not in the book.

Brown Sugar Sandwiches would make an excellent gift for anyone who might have had Morris as a teacher at Messiah College (now University) or who is interested in well-told memoirs. The book is available for $10 a copy plus postage (about $3.00). Or you can take advantage of this special offer: pair Brown Sugar Sandwiches with Morris’s previous book, Stories and Scenes from a Brethren in Christ Heritage, for $20, including postage. Order copies from the editor at [email protected]

The E. Morris and Leone Sider Institute for Anabaptist, Pietist, and Wesleyan Studies at Messiah University is excited to announce two new programs to fund research by established scholars.

The Sider Grants Program, generously endowed by E. Morris and Leone Sider, funds research and writing by established scholars from Brethren in Christ, Mennonite, and related traditions and whose work is focused on one or more of the faith traditions stated in the title of the Institute (e.g., Anabaptism, Pietism, or Wesleyanism). Priority is given to projects focused on the Brethren in Christ Church.

“We are thrilled about these new programs,” says Sider Institute director Devin Manzullo-Thomas. “Through the generosity of the Siders and the Leshers, we are able to offer established scholars with necessary funding to carry out important research that will deepen our knowledge of the Brethren in Christ and our founding traditions.” 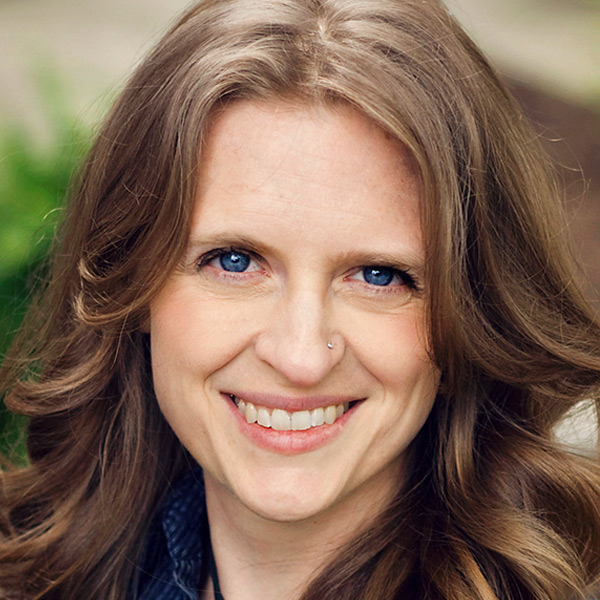 The inaugural recipient (2020-21) of funding from these two programs was Dr. Lisa Weaver Swartz of Asbury University in Wilmore, KY. Swartz, a sociologist of religion with expertise in the study of religious communities and cultural identity maintenance, is using funds from these programs to support the Brethren in Christ Pastoral Identity Portraits project. This study explores the state of shared identity among the denominations’ pastoral leadership. Drawing on a set of twenty-six interviews with pastors from across the Brethren in Christ Church in the United States, the project examines the cultural, theological, and relational ties that connect pastors to each other and to the denomination. Findings from this study will be published in a forthcoming edition of Brethren in Christ History and Life.

The Institute is currently accepting applications for the Lesher Fellows Program and the Sider Grants Program for the 2022-23 academic year. More information about the programs and the application process.

from the Brethren in Christ Historical Library and Archives

The Brethren in Christ Historical Library and Archives has raised $10,000 to launch a new program: the Hispanic Leaders and Congregations Collecting Initiative.

Funded through generous donations from the Southeast Regional Conference of the Brethren in Christ U.S. and numerous individuals, as well as a $5,000 matching gift from the McBeth Trust, this initiative seeks to document the history of Hispanic Brethren in Christ in the United States.

“Through the generosity of these individuals and organizations, we can now collect and preserve an important and yet little-known part of the Brethren in Christ story,” says Devin Manzullo-Thomas, director of archives. “On any given Sunday, about 20 percent of Brethren in Christ congregations in the United States worship in Spanish. How did this come to be? That story is a fascinating and important part of our history as Brethren in Christ. Unfortunately, we have almost no records—beyond what’s available in the Evangelical Visitor and the General Conference Minutes—to document it! With this initiative we are now able to collect historical materials, interviews, and photographs that tell this story.”

The collecting initiative has several components, the most significant of which is a collection of oral histories. The process of collecting these oral histories is already underway. Earlier this year, Archives director Devin Manzullo-Thomas and former BIC U.S. moderator Warren Hoffman traveled to Virginia to conduct extensive interviews with Bishop Eduardo and Jill Llanes. As many Historical Society members know, the Llaneses started a church planting effort in Miami, Florida, in the 1980s, which resulted in a network of Brethren in Christ congregations in the South Florida region. The interviews covered Eduardo’s life from birth until his call to Miami (1941-1985), the challenges in his church planting and pastoral work (1998-2006), his ministry as bishop (2006-2012), and his retirement (2012-present).

In addition to the oral history interviews with the Llaneses, Manzullo-Thomas and his student assistants also conducted an interview with Judy (Wolgemuth) Hamilton, whose parents were early Brethren in Christ missionaries to Cuba and played a key role in converting Eduardo to the Christian faith.

An extensive oral history interview program with current and former Brethren in Christ pastors and lay leaders in the Miami area is tentatively scheduled for early 2022.

In addition to the oral history program, the collecting initiative will also involve processing collections related to Hispanic congregations, collecting materials from Hispanic congregations, and digitizing related materials already in the Archives. Digitized materials, including photographs, will be made available to the public via Mosaic, Messiah University’s digital repository (mosaic.messiah.edu).

The Archives continues to welcome financial contributions to support this collecting initiative. Donations in any amount can be sent to the BIC Archives, 1 University Avenue Suite 3002, Mechanicsburg, PA 17055. Checks should be made payable to “Messiah University,” with “Hispanic Initiative” in the memo line. 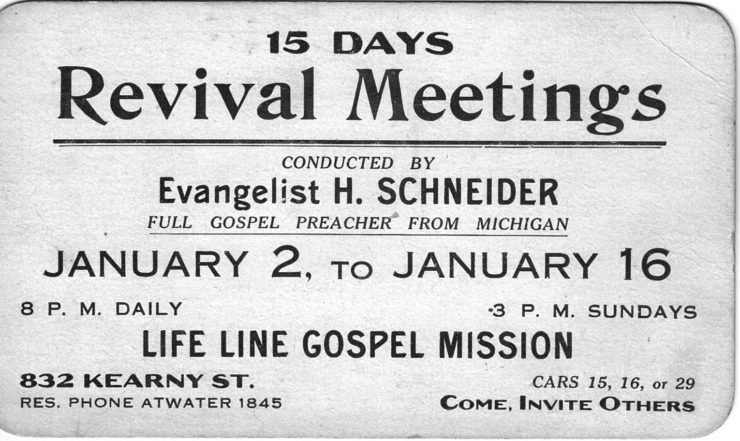 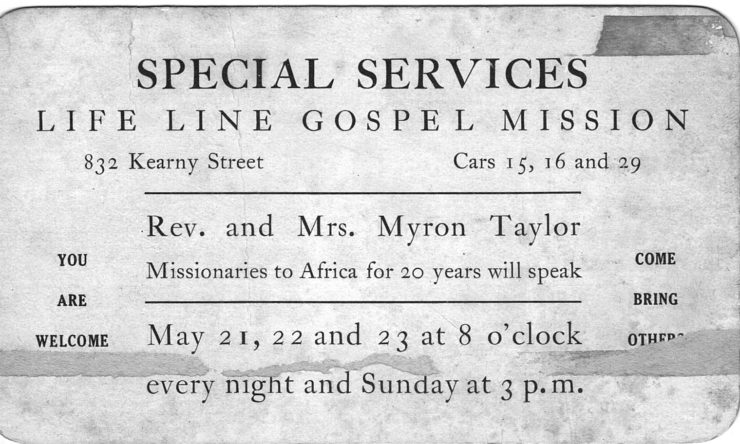 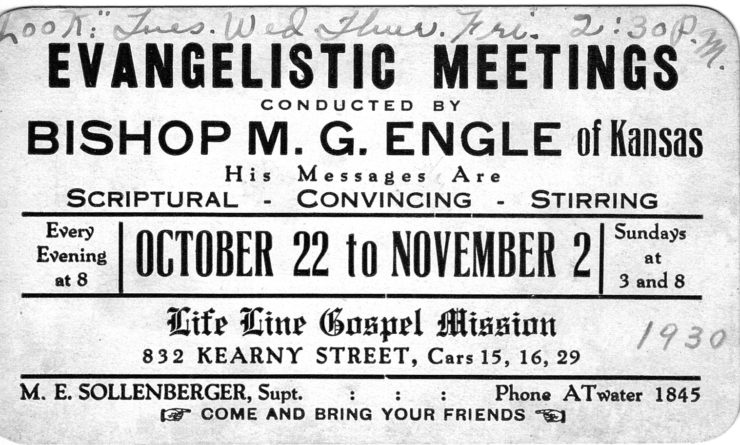 Recently Doris Crider contributed a number of photographs related to Life Line Mission and Life Line Chapel, taken while her parents, Avery and Emma Heisey, led the mission work in San Francisco (1956-66). She also donated several items from much earlier days at the mission, including five postcard-size cards advertising various Brethren in Christ who held evangelistic services at the mission, then located at 832 Kearny Street. Three of the five cards are shown here.

One card has the date “1930” penciled on it and includes the name of the mission superintendent at the time, Maggie (M.E.) Sollenberger. She wrote in the 1931 Handbook of Missions, “We had revival meetings before the holidays, conducted by Bishop M. G. Engle, chairman of the Home Mission Board.  His messages were stirring, scriptural, inspirational.  Results were brought forth.  Numbers came to the altar of prayer.”

If you discover similar historic artifacts as you sort through family papers or boxes in the attic, the Archives would be glad for you to “bring them forth—checking with Archives staff to see if they might be important additions to the Brethren in Christ Archives collections. 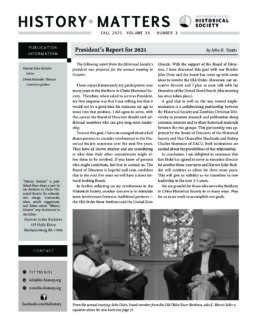 View the Fall 2021 newsletter in PDF