Later this year, on November 11, 2018, the world will observe the end of World War I, often referred to as the “Great War“ or the “war to end all wars.” To remember those who resisted the war and witnessed for peace, the Kauffman Museum in North Newton, Kansas has developed a traveling exhibit, “Voices of Conscience: Peace Witness in the Great War. ” The exhibit premiered at the National World War I Museum in Kansas City during a symposium in October 2017 called “Remembering Muted Voices: Conscience, Dissent, Resistance and Civil Liberties in World War I Through Today.” According to the Kauffman Museum’s description, the exhibit “remembers the witness of peace-minded people against the First World War 1914-1918. This witness included men and women, religious believers and secular humanitarians, political protesters and sectarian separatists. They resisted U.S. involvement in the war, the enactment of military conscription, the war bond drives, and the denial of freedom of speech under the Espionage and Sedition Acts. For this resistance many suffered community humiliation, federal imprisonment, and mob violence at the hands of a war-crusading American public. This exhibit lifts up the prophetic insights and the personal courage of World War I peace protesters, and suggests parallels to the culture of war and violence in our world today.” See voicesofconscienceexhibit.org for more information, including how to host the exhibit in your church or community.

Annual Ringgold Heritage and Hymn Sing Services to Be Combined

Join us for the 2018 Annual Heritage Service and Hymn Sing at the historic Ringgold Meeetinghouse (MD) on Sunday, July 15 at 2 p.m. This year, we’re combining the Historical Society’s Heritage Service and the Ringgold Meetinghouse Hymn Sing in order to coincide with the 2018 Brethren in Christ U.S. General Assembly (formerly known as General Conference). Our hope is that this will encourage more people to experience this meaningful gathering—especially for those who live in other parts of the country or the world! Watch this website (Events) and our Facebook page for updated details about the program.

Editor’s Note: Recently, on the Brethren in Christ email discussion group, “BIC-Talk,” Aubrey Hawton, Oro-Medonte, Ontario described a recent find on eBay.com, a website that connects buyers and sellers all over the world: a postcard of the Moonlight Church, a River Brethren church in Kansas (later the Bethel Brethren in Christ Church, about two miles from the Zion church). The postcard had originally been mailed in 1909. In the ensuing email discussion, Bonnie Frey, whose husband Chris grew up in Kansas, chimed in with her and Chris’s memories of the church. I asked Aubrey to say a little more about his eBay adventures, and Bonnie and Chris gave their permission to share some of their memories. Aubrey: I grew up in a Brethren In Christ congregation in Ontario, Canada, with direct ancestors who included Brethren in Christ ministers, bishops, missionaries, etc. I’ve always been fascinated by history, and that fascination led me to do some research on some of the schisms that have occurred. In my university “Mennonite History” courses, I wrote about the development of the Old Order River Brethren, the United Zion Church, the Calvary Holiness Church, and a schism in a Brethren in Christ congregation in Saskatchewan that hit particularly close to home, since that’s where my mother is from. This fascination with history led me to look for items of historical interest online, particularly on eBay. In the past, I’ve located old copies of the Evangelical Visitor; a copy of my grandfather’s book “My Pilgrimage and Pioneering,” which he wrote shortly after homesteading in Saskatchewan in the early 1900s; copies of Brethren in Christ and Old Order River Brethren (OORB) hymnals, some of which contained the original owners’ inscriptions; a few copies of The Gospel Witness, a publication of the Calvary Holiness Church (Philadelphia); numerous postcards of Brethren in Christ and River Brethren (often mistakenly written as River Brethern) churches, meeting houses, and camps. I’ve occasionally shared my findings with the BIC-Talk email list, in case any others are interested in purchasing the items that I’ve found. Sometimes, if the piece has a real connection with me, I’ve purchased it. Other times, I’ve just looked in fascination at the items that have appeared. As I write this, eBay has several related items for sale: postcards of the Abilene River Brethern [sic] Church; an unused advertising pencil from the Brethern [sic] in Christ Church in Graterford, PA (Jacob H. Bowers, Pastor); an OORB hymnal belonging to Eli G. Musser; a fundraising cookbook from the Sonlight River Brethren School, along with another from the Conoy church; a 1944 press photo of OORB member Earl Hawbaker and his daughter Hazel, of Minburn, IA, as Hazel prepares to leave for New York and begin training for the WAVES (the WWII women’s branch of the United States Naval Reserve); along with several other more recent publications by Brethren in Christ authors. Memories from Chris and Bonnie Frey:

Where is the postcard of the Moonlight Church now? Andy Saylor, from the Harrisburg (PA) Brethren in Christ Church, bought it from eBay and donated it to the Brethren in Christ Historical Library and Archives. Should you happen upon similar treasures with historical significance for the Brethren in Christ, whether online or in your attic or basement, the Archives will welcome additional contributions!   Correction: A photo in the Fall 2017 newsletter incorrectly identified M. G. Engle. Instead, the photo is of Mike Engle.

From the Brethren in Christ Library and Archives

It is exciting when “new treasures” come to the Archives. Just last week, the Archives received a picture postcard of the Moonlight (Kansas) Brethren in Christ Church – a photo that we did not have in our collection. A member of the Brethren in Christ Church noticed it for sale on eBay, purchased it, and donated it to the Archives (see previous article). A few days later, Marian Musser brought to the Archives a number of items that her father, the late Jacob Kuhns, had saved. Among the donated items were several newspaper clippings and a letter related to the train station that had been located in Grantham, adjacent to the campus of Messiah College. The letter, dated June 16, 1948, was written by Henderson Gilbert on Harrisburg Railways Company letterhead. Mr. Gilbert was responding to a March letter from Mary Stoner of Grantham, who evidently had posed several questions. He wrote, in part, “Grantham was named after the town mentioned in Walter Scott’s novels as it was quite the custom in that time to use names in books of that sort. “The [train] station was established at Grantham not only for us [the Gilberts had a country home nearby], but others because there were no bridges over the creek from York County to Bowmansdale, except the old wooden bridge and everyone had to ford the creek, which was bad in winter and could not be done in high water. “Grantham also became important at the time of the establishment of the industries at the Noodle Works, etc.”

The Rotogravure Section of the March 27, 1948, Harrisburg Evening News carried a series of photographs highlighting changes in the locomotives used by the Reading Co. railroad. Cropped from the page of larger photographs is this picture, taken in 1896. The caption reads, in part, “… Little old engine directly above was photographed 52 years ago by Henderson Gilbert on Gettysburg & Harrisburg branch, at Grantham station, near Gilbert country home. Joseph W. Kline, successful Harrisburg business man, was newsboy on the train, and the engineman, seen in cab, was Morris Yeoman, late of this city… .” The undated photograph below, from the Archives photo collection, shows a train from Harrisburg pulling into Grantham on the way to Gettysburg. The building on the left, with the tall smokestack, was S. R. Smith’s noodle factory. The passenger station is just visible on the right, and the white building barely visible on the hillside in the background is Messiah College’s Old Main. 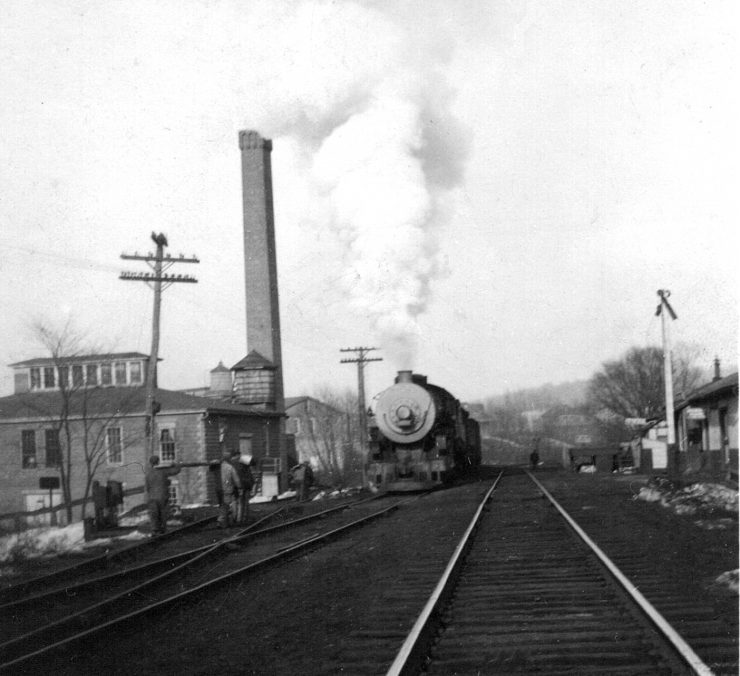 “America’s Pastor” and the Brethren in Christ Church 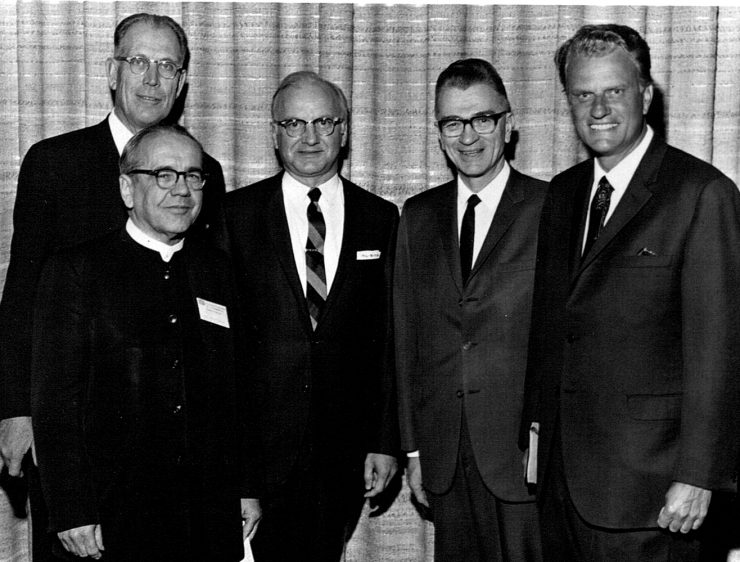 Billy Graham—the celebrated evangelist and icon of American evangelicalism—died in February 2018 at the age of 99. For much of the twentieth century, Graham was the public face of evangelical Christianity in the United States—a religious figure so well known that he earned the nickname “America’s pastor.” During the middle decades of the twentieth century, the Brethren in Christ Church in North America became more closely associated with the mainstream of evangelical Christianity. As a result, many Brethren in Christ came to know and respect Graham and his ministry. In this 1967 photo, two Brethren in Christ leaders—C. N. Hostetter Jr. (second from left) and Arthur Climenhaga (fourth from left)—pose with Graham and two other officials at the 25th anniversary celebration for the National Association of Evangelicals (NAE). For more on the connections between Graham and the Brethren in Christ, check out our blog.