Ken was a pastor for 27 years, serving in the Great Lakes and Susquehanna Conferences. He served denominational general secretary for six years and has worked with Brethren in Christ U. S. World Missions for 15 years. He also served as executive director of the International Brethren in Christ Association for three years. Sometimes, these assignments were concurrent.

Retired from all but his missions assignments since last year (he still serves as a regional missions administrator), Ken is now available to offer more of his time to the Historical Society. He is especially interested in the convergence of history and present experience so we can learn from both. He looks forward to active conversations on how our history influences our current reality so we can be all the Lord desires us to be as we serve this present day.

Board President Emerson Lesher expressed appreciation for outgoing executive director Micah Brickner, and notes the many connections, creative ideas, administrative skills, and a local and international perspective that Ken brings to the Society.

REMINDER: MCC at 100: Call for Proposals

The centennial conference to examine the past, present, and future of Mennonite Central Committee (MCC) is scheduled for October 2020, and proposals are still being accepted. Organizers are looking for proposals from a “wide variety of disciplinary perspectives, including but not limited to anthropology, conflict transformation and peacebuilding, cultural studies, development studies, history, political science, sociology, and theology.”

The Brethren in Christ have been members of MCC since World War II, and many of our churches around the world have benefitted from the peace, relief, and development work that MCC has done. Many Brethren in Christ people have volunteered with MCC both domestically and internationally, served on MCC boards, and supported MCC with financial and material gifts. The December 1995 edition of Brethren in Christ History and Life focused on Brethren in Christ participation in MCC in observance of the 75th anniversary of MCC.

More information about how to submit a proposal. The deadline for submission is December 1, 2019. To find out more about possible research support or other relevant Brethren in Christ-related topics, contact the editor.

Join us for our annual Heritage Service at the historic Ringgold Meeting House. This service takes place each year on the first Sunday of June. This year we want to experience the type of worship our brothers and sisters knew in days gone by.

We will have three pastors on our Preaching Bench and a chorister. The pastors will all expound on the same passage that will be chosen in advance. However, we will seek to experience the movement of the Spirit in our midst as the speakers will not know what the others will be addressing.  They will each speak “as the Spirit Leads.” The chorister will also know the passage being expounded and will seek to respond in music as the Spirit leads in our worship. Don’t expect an order of service when you arrive!

Come and join in this worship experience. Perhaps the Spirit will encourage your spirit to also give a suggestion for a song as you are moved during the service. Following the service there will be opportunity to explore the Meeting House.

Charles Frey: "In All Thy Ways Acknowledge Him"

Editor’s Note: Several years ago, Craig Sider, former Brethren in Christ pastor and bishop and now president of Movement.org, started to write a book about 10 Christian leaders. Because he had a personal relationship with Charles Frey, he interviewed him first. As their conversations progressed, Craig realized he had too much material for just one chapter so he asked Charles if he could lengthen the chapter into a small book. Charles reluctantly agreed. Charles was a lifelong member of Manor (PA) Church and co-owned Turkey Hill Dairy until it was sold in 1985. He also served the wider Brethren in Christ Church at the denominational level and was a generous benefactor to both the church and Messiah College.

Following is a brief edited excerpt from the book, reprinted by permission of the author. The book was written before Charles’ death in 2016. Copies are available for the cost of postage ($3.00 in the U.S.). Contact the editor. 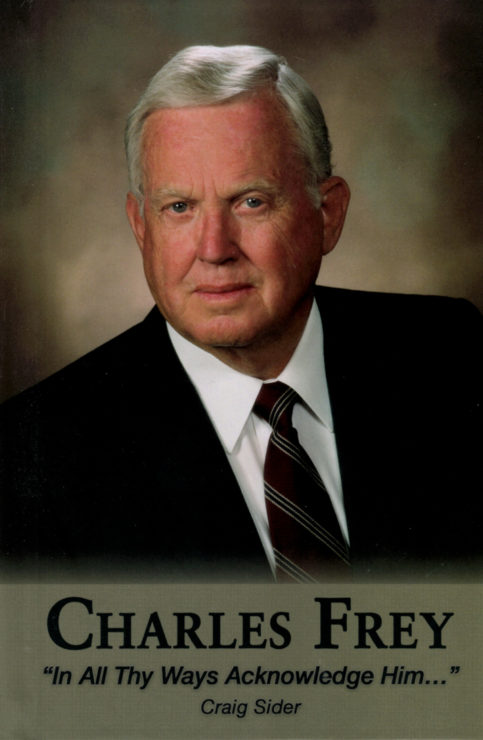 Standing alongside Charles for 60 years was his wife, Ann. Charles and Ann were 19 and 20 when they were married in 1945. When they started their married life together, Turkey Hill was very early in its development and Charles worked tirelessly to provide for Ann, to build the dairy, and to support their growing family. Charles and Ann’s family grew to include four children: Phil, Linda, Mike, and Nick.

Each of the children note how family and work were significantly intertwined. Phil speaks to how life with his father was so integrally connected to farm and the processing plant. Mike says, “My earliest memories of dad are of him working hard. We worked really hard. In snow we worked 36-48 hours straight.” Linda recalls, “Dad would come home for dinner and then go back to work.” And son Nick notes, “I remember being around the dairy with dad at night. He had to go down and check the compressors.” Family like was a culture of work; it certainly wasn’t 9 to 5.

Ann was the glue at home; her job and vocation in life was to create a home and raise the children. “Pretty much, mom worked at raising the kids and dad worked at the dairy,” recalls Mike. It was a partnership in life, Charles working outside the home and Ann working inside. Beyond caring for the home and the children, Ann was a great compliment to Charles. Mike reveals, “Mom was soft-spoken, very easy to get along with . . . and she knew how to take the edge off of him when he could have an edge. In her way she would say, ‘Well, Charles,’ and would soften him up.”

As the family grew, Charles and Ann’s life together was rooted in faith in Christ and deep involvement in Manor Brethren in Christ Church. Sunday found the entire family engaged at Manor Church, but faith was far more than a Sunday expression. Linda recalls how family devotions were a consistent part of family life: “Each night we had family devotions at dinner and if the phone rang, it was ignored.” Faith, work, and family formed a complete whole. Through their 60-year journey together, Ann was a constant partner and a fixture of support for Charles. When she passed into the presence of Christ in April 2005, Charles lost his spiritual partner, his lifelong friend, and his confidant. The years that followed were difficult for Charles, adjusting to life without Anna’s presence and lacking the partnership that the two of them forged together over nearly six decades.

But, as Scripture says in Psalm 30, “joy comes in the morning.” Charles’ morning came when he met and then married Beulah Landis on July 19, 2009, who became his new partner in life.

If you sit with Charles long enough, listen to stories of his journey, and ask questions about key turning points in Turkey Hill’s history, clear leadership principles emerge. These principles grew out of an unwavering commitment to biblical truth and were forged not in the school classroom but in the crucible of decades of organizational leadership.

Periodically in my role as editor for the Historical Society, I visit the Archives to find a photo or missing piece of information or to do research. I don’t often take the time to peruse the exhibits, which perhaps explains why I never noticed the well-worn wooden box on one of the front display tables until recently. I read the caption describing the “Traveling Library,” was immediately intrigued, and wondered why I had never known about such an initiative before. 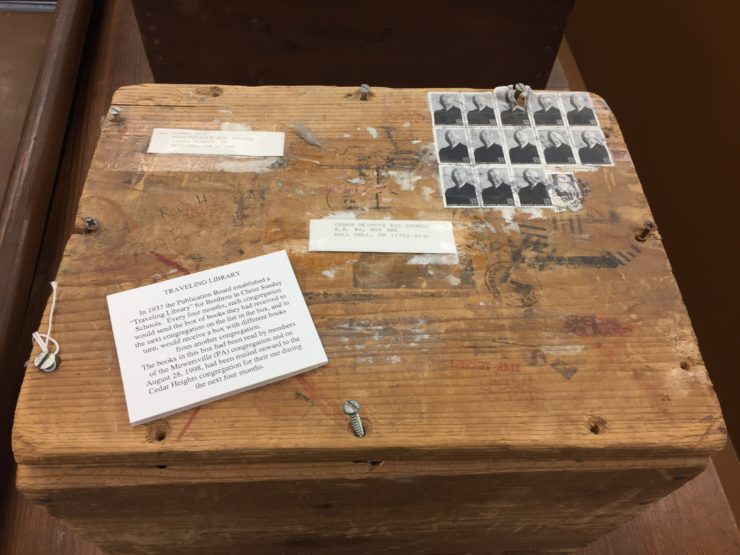 The Traveling Library began in 1936 as an initiative of the Publication Board, and initially involved several congregations in southern Ohio. The Publication Board’s report to General Conference in 1937 explains the rationale: “This present age has presented to the world an unlimited supply of books. Thus it is apparent that people desire to read. . . . [M]any Sunday Schools in our brotherhood have expressed the desire to have a library to supply the need of good reading literature. The cost of installing a permanent library was too great for them to consider. . . .  This appeal led our Publication Board to institute a system whereby our people may read good Christian literature without a great deal of expense.”

In its 1943 report to General Conference, the Publication board noted that “the largest number of readers are from the children and young people’s groups, therefore we have greatly increased the number of books appealing to these groups.” The report also said that the office of central librarian moved from Nappanee, Indiana to Elizabethtown, Pennsylvania, where a Christian Light Bookstore was located. The 1946 report noted that the “scarcity of books through the latter years of the war made the building of new units almost prohibitive.”

We know that the Traveling Library continued operation until at least 1998 because the box in the Archives is postmarked August 28, 1998. That box had been shipped from the Mowersville (PA) congregation to the Cedar Heights (PA) congregation.

I was curious about whether others remembered the Traveling Library and so posted the above photo on the Historical Society’s Facebook page. The response surprised me—and helped jog my own memory of a traveling library display at the Grantham Church many years ago that I had never connected to a denominational initiative.

Many of those who commented on Facebook—almost all women—told of their memories of the traveling library. Many congregations were named: Cedar Springs (later Cedar Heights), Grantham, Harrisburg, Locust Grove, Mastersonville, Mechanicsburg, Palmyra, Refton, all in Pennsylvania; Nappanee, Indiana; Dallas Center, Iowa; Sippo Valley, Ohio; Zion, Kansas; Clarence Center, New York; and Springvale, Ontario. Respondents described how they eagerly looked forward to a new box of books, many of them hoping for another book by Grace Livingstone Hill (a popular Christian romance novelist). One person remembered working in the Christian Light Bookstore in Elizabethtown between missions assignments where she helped to pack boxes. One of only two men who responded noted that he was pastor of the Cedar Heights congregation in 1998 and thus may have gone to the Post Office to pick up the very same box that is currently in the Archives.

The story of the Traveling Library box is an interesting confluence of the old and the new, and says something about how current technologies can help us tell the stories of the past. I made an interesting discovery in the Archives, a repository of “old” things, and then shared my discovery on social media, a newer technology. This in turn generated stories that offer some rich context to the artifacts and documents that quietly wait in the Archives to be discovered. Who knows what other interesting discoveries are waiting to be made, and what new stories they will elicit to enrich our understanding and knowledge of the past?

Among the 22 books in this Traveling Library box were the following titles:

The Dog Who Would Not Smile

Song of the Silent Harp

Wings of the Morning

Return to the Hiding Place

How to Eat Humble Pie and Not Get Indigestion

Making Peace with Your Past

Just As I Am

Thanks to Archivist Glen Pierce for researching Publication Board reports to General Conference. Join us on Facebook. 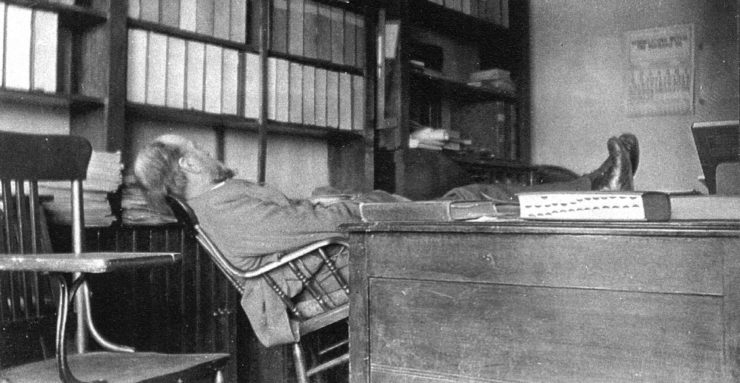 This irresistible picture of Enos Hess, president of Messiah College from 1923 to 1934, was in a photograph album prepared by Erma Hoover for her husband, Kenneth B. Hoover, on the occasion of his 90th birthday in 2001. 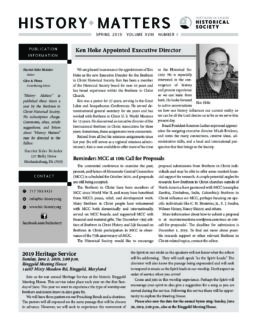 View the Spring 2019 newsletter in PDF