If you attended General Conference in July or “liked” our new Facebook page, you’ll probably recognize the Historical Society’s new logo. The logo was designed for us by Brianna Jewell, a student at Messiah College, as an assignment for a graphic design class taught by Dr. David Kasparek of the Harrisburg Brethren in Christ congregation.

The Society’s new brochure, also designed by Brianna, describes how the logo draws on three elements to communicate our vision that the past can serve as a guide to the present and future. At the heart of the logo is a meetinghouse (in a rust or brick color in the original logo), the simple worship space used by the Brethren in Christ. The meetinghouse symbolizes the Brethren in Christ’s theological commitments to fellowship, equality, simplicity, and humility. Leading up to the meetinghouse are steps, again alluding to the architecture of historical meetinghouses, but also symbolic of the Society’s invitation to explore the church’s history, theology and contemporary life and thought. Connecting the meetinghouse and the steps is an arrow, a symbol suggesting connection and direction. By completing a circle that includes the meetinghouse and the steps, the arrow serves as a reminder of the dynamic relationship between the past, present, and future.

The logo is only one part of our effort to create a stronger visual identity for the Society that will appeal to all generations that care about the story of the Brethren in Christ. For General Conference, we launched a social media campaign on Facebook (facebook.com/bichistory) and Twitter (@bichistory) with the hashtag #bichistorymatters, where we shared photos and interesting facts from past conferences. We’re in the process of redesigning the journal (Brethren in Christ History and Life) and this newsletter, and launching a new website. Watch for the redesigned publications and website as we unveil them early in 2015. You can also contact the editor for copies of the new brochure

Register Now for the Annual Meeting

The annual meeting of the Historical Society will take place on October 4 at the Grantham Brethren in Christ Church. The meeting will begin with dinner in the church’s fellowship hall at 5:30. The program, to be held in the sanctuary, will feature the release of a new biography of three couples. The authors and editor will all participate in the program (see page 2 for more about the book). Members of the Historical Society will receive a free copy of the biography at the annual meeting, while copies of the book will be mailed to members who are unable to attend. The book will also be available for sale to non-members who attend the meeting. The annual meeting is open to the public, but reservations are required. The cost is $15. If you haven’t already done so, you can register using the form on page 3.

A Preview of Three Biographies

Worthy of the Calling

Editor’s Note: Thanks to Devin Manzullo-Thomas for allowing me to adapt the author/editor interviews he did for his blog, “The Search for Piety and Obedience” (devincthomas.wordpress.com), for use here.

Worthy of the Calling is the next book to be published by the Historical Society in the series of biographies of people who have contributed significantly to the Brethren in Christ Church. Three couples are profiled in the book: Paul and Lela Hostetler, written by their daughter Beth Hostetler Mark; Luke and Doris Keefer, by Historical Society assistant editor Devin Manzullo-Thomas; and Harvey and Erma Sider, by Harvey’s sister AnnaRuth Sider Osborne. The book is edited by E. Morris Sider, editor emeritus for the Historical Society.

Why biographies of these three couples? Morris answers the question this way: “The biographees are representative of the Brethren in Christ in the last half of the twentieth century. The Hostetlers represent pastoral ministry; the Siders missions and administrative leadership; and the Keefers academic life and doctrinal issues. Also, they have not been subjects of the 150 or so biographies and autobiographies produced in the last several decades.”

Of her biography of her brother and sister-in-law, AnnaRuth notes that “Harvey and Erma are important to Brethren in Christ history for their leadership during a time when the church struggled to find its voice in a changing world.“ Beth characterizes her parents as “a typical, conservatively dressed, Brethren in Christ couple who began ministry (in 1949) on the cusp of a ‘denominational sea change.’ In other ways their pastoral ministry illustrates how early adoption of evangelical methods of outreach and contemporary clothing (by them and their peer congregants) helped their congregations become more welcoming of non-historically Brethren in Christ individuals. Their second pastorate is illustrative of an early, non-rural church planting, and my father’s later ministry with the Brethren in Christ Stewardship Office sheds light on the attempt to gain support for giving to Cooperative Ministries, rather than to individual Brethren in Christ board ministries.” Devin describes Luke as someone who in his roles as college professor, member of denominational boards and committees, pastor, evangelist, and author of works on Brethren in Christ theology and history “made lasting contributions to the life and thought of his beloved denomination.”

Each of the authors started their research and writing already respecting their subjects, but came to a new appreciation for them in the course of their work. Each also faced challenges. For example, AnnaRuth had to sift through fifty years’ worth of writing by Harvey and Erma, plus many interviews with colleagues and family members, to select and condense what would go in the final biography. She regrets having to leave out some wonderful stories for lack of space.

Noting that “researching is always my favorite part,” Beth says that “buckling down to writing is the most difficult!” Beth also recounts that when she started the project, her mother was in the last years of her life. So after collecting a lot of interviews (mostly by email), she decided to share them with her parents. These interviews helped them in the weeks before Lela passed away to “look back over a period of sixty years and see where God had clearly led them and how their ministry fit into the historical context of the denomination.”

Devin’s research blended the approaches of his fellow authors, joining conventional archival research with oral history interviews. Luke’s voluminous writings on Brethren in Christ history and theology provided much material to work with, as did his personal papers, which were posthumously deposited in the Brethren in Christ Historical Library and Archives. Meanwhile, he also conducted numerous interviews with friends, family, and colleagues of Luke and Doris. “It was a special honor to sit for many hours with Doris,” Devin notes. “I appreciated her willingness to share both the challenges and triumphs of her and Luke’s life together.”

Morris notes that readers of the biographies will be better able to understand the church in the years spanned by the lives of these three couples. In particular, he says, readers will learn about the sense of heritage that was a part of the church in those years, the importance of women in ministry, family life, changes that developed in church life and doctrine, the importance of Christian community, the significance of the Pietist and Anabaptist elements that run throughout those years, the church’s institutions and events, and sacrificial service. 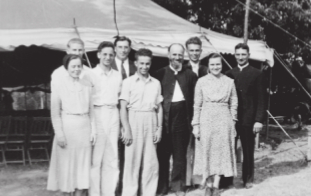 Roxbury and Memorial Holiness Camp Meetings are well-known across the Brethren in Christ Church. But as shown in Mary E. Wenger’s report in the Evangelical Visitor (excerpted below), the Brethren in Christ sponsored camp meetings in other areas of the denomination as well. This issue’s “News and Notes” article grew out of attempts to identify this photograph, which was found unmarked in a collection of photos donated to the Archives. A couple of persons helped to identify several key individuals and said what they thought was the setting of the photo. That in turn enabled the Archives’ staff to search back issues of the Visitor and the Clarion, resulting in dating the event and providing identification of the other persons in the photograph. Not every attempt at historical research is this easy, however. It is far better to have photographs correctly identified and dated before they are deposited in the Archives.

Last fall [1937] the first tent meeting was held in this community on Eld. and Sr. Wm. C. Deemy’s farm by some of the brethren and sisters from Des Moines with Bro. H. W. Landis as evangelist.

Seven outstanding conversions resulted from these meetings among whom were Bro. and Sr. Howard Scott. These young people who were steeped in sin have been marvelously changed, both in their lives and in their home. Homes in this community have been open for prayer meeting every Thursday evening since the tent meeting.

Several saints felt God’s direction for a ten-day Interdenominational Holiness Camp Meeting in this community. Bro. Scott offered his farm and assistance for this work.

The Camp Meeting began July 21st and lasted until the 31st, with Bishop R. I. Witter, Navarre, Kans., as evangelist; J. W. Payne, Westerville, Nebraska, and H. W. Landis, Des Moines, Iowa, as the speakers. The Penn. Quartet from Grantham furnished the music and special singing. Srs. Frances Smith and Dorothy Witter were the pianists and children’s workers. …

Meals and lodging were provided on the free will offering plan. A wonderful spirit of cooperation and unity prevailed amongst all who generously lended a helping hand. Day services were well attended with large crowds in the evening services. About fifty men, women and young people sought God for saving and sanctifying power while others turned from their backsliding ways and got back to God.

We are grateful for the spiritual contributions which the young people from Pennsylvania presented to these services. Our continual guests were five cars from Pennsylvania, some from Kansas, Nebraska, Ohio, Indiana, and various parts of Iowa.

Nearly all the vegetables were provided by the kind friends of the community who planted extra garden, especially for the camp.

Near the close of the camp a large interest was manifested and requests came in for a Camp Meeting in 1939. Already a substantial sum has been pledged for next year’s Camp. Plans and arrangements are being made to this end, the Lord willing. The dates chosen for this Camp are August 10th to 20th. We ask an interest in your prayers for this work.

Images From the Past 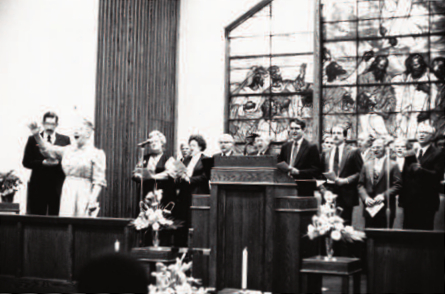 The Messiah Village Chapel will mark its thirtieth anniversary with “Built Up & Joined Together,” a program of reflection, celebration, and fellowship scheduled for Sunday, September 28, 2014 at 2:00 p.m. All are warmly welcomed to join the Messiah Village congregation and enjoy inspirational stories and photos like the one seen here. This photo was taken on April 15, 1984, Dedication Day, when the newly-constructed Chapel was officially dedicated for purposes of preaching the Word, promoting Christian missions at home and abroad, and serving as a “house of prayer, a haven of comfort, a community of fellowship, and a gate to heaven.” Grace Stoner Lady leads the congregation in song, while Reverend George Kibler and other program participants look on. The stained glass window in the background depicts the Ascension of Christ and was purchased from Lancaster’s former St. Paul’s United Church of Christ. 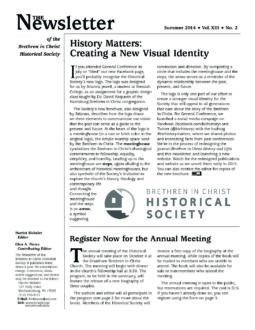 View the Summer 2014 newsletter in PDF