The Historical Society will partner with Messiah Lifeways for this year’s annual meeting on November 5, 2016, at the Grantham Brethren in Christ Church, Mechanicsburg, PA.

Rev. George Kibler, Dr. Emerson Lesher, and current CEO Curt Stutzman will be featured guests in a night of storytelling as they share reflections, memories, and likely, some funny stories. This idea was birthed as Messiah Lifeways planned its 120th anniversary celebrations this year. Although the organization has a long history of leadership, including many decades of stewards and matrons who served the Home on Bailey Street and at Paxton Street, only the last three are still living, giving us a unique opportunity. Messiah Lifeways’ three modern “chief executives” all live locally and have many attributes in common – from their connections to Messiah College to facing the challenges of construction!

The dinner will begin at 5 p.m. in the Grantham Church Fellowship Hall. The storytelling program, slated to begin at approximately 7:15 pm, will be held in the sanctuary. In addition to some video vignettes, Devin Manzullo-Thomas, director of the Sider Institute for Anabaptist, Pietist, and Wesleyan Studies at Messiah College, will moderate a conversation among the three presidents. Devin also serves as archives coordinator for the college’s Ernest L. Boyer Center, and regularly teaches courses in the History, Biblical and Religious Studies, Peace and Conflict Studies, and Interdisciplinary Studies departments at the College. He is currently enrolled in a doctoral program at Temple University. His enthusiastic interest in Brethren in Christ life and history, and his engaging, inquisitive personality make him an ideal moderator for an evening of storytelling.

Register for the dinner and annual meeting. Cost is $15. Persons wishing to attend only the program in the sanctuary may attend at no charge.

This portrait photo currently makes its home with John and Mary Ebersole who live in Akron, PA and attend the Speedwell Heights Brethren in Christ Church. The photo was a gift from Wayne and Alma Ebersole, John’s parents.

The photo surface appears to be canvas. The woven grain is visible on the reverse side of the photo. The canvas is stretched over a wooden frame. The faces look like photographic images, but the clothing and hands do not look realistic. The hands especially appear to be drawn onto the image. Aspects of the clothing look one-dimensional – for example, the cascading bonnet ties lack shading. Jacob’s vest and lapels appear to have fine highlights added to add dimension.

Whether this was their wedding portrait is not known for sure, but it likely was. The date is probably in the early 1860s. It is large and imposing – 16“ wide by 20” high.

The photograph raises a number of interesting questions:

We would love to hear from readers who know something about photography of the mid-1860s and could help answer any of these questions or provide any additional information about the photo and the people in it. Email the editor if you have any information.

Judy Hamilton, whose parents Howard and Pearl Wolgemuth were Brethren in Christ missionaries in Cuba from 1955-1960, recently contacted the Archives regarding 113 slides she had acquired, most of which were taken during the year that Dale and Betty Ulery and three of their children worked in Cuba (1954-1955). Below, Judy tells the story of how the color transparencies were saved from destruction and became part of the Archives’ photograph collection.

The members of the Cuban church are very interested in learning of and preserving the history of the Brethren in Christ mission work in Cuba. After sharing some of my parents’ slides with them, one person suggested I contact the family of Dale Ulery to see if they had photographs. Dale, his wife Betty, and Janet, David, and Brenda had spent a year there while my parents prepared for their permanent assignment in Cuba.

On a Saturday evening I decided to phone Keith Ulery, Dale and Betty’s son, telling him of my interest in borrowing any slides or pictures of the Cuban work he might have. He quickly replied that due to downsizing and lack of family interest, their slides were in a trash bag – ready for Monday’s trash pickup. After offering to retrieve them, which he did, we both agreed the timing of my telephone call was “God-ordained.”

Thankfully, this historical material was spared and preserved for current and future interest and research.

Judy Hamilton and Eduardo Llanes provided the information about the three photos: 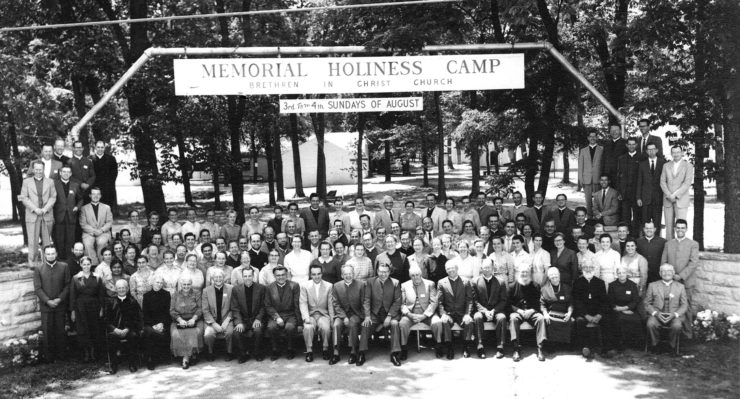 Brethren in Christ home mission workers and members of the Home Mission Board gathered at Memorial Holiness Camp in West Milton, Ohio, June 18-21, 1957, for the fourth Mission Workers Institute and Fellowship Retreat. The 1957 Handbook of Missions reports the guest speaker, Bishop E. J. Swalm from Canada, brought messages on Ephesians while board members and others conducted worship sessions and focused on such topics as planning services, counseling, and financing. One home mission worker said, “Words cannot express how rich an experience this has been to me, and what a spiritual challenge.” Another said, “It has definitely been a high point in my spiritual experience.”

Query Regarding Brethren in Christ Fiction 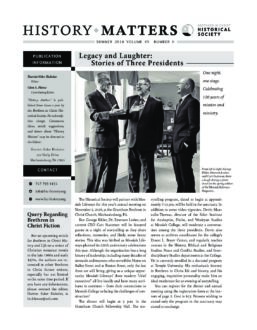