Change of Plans for 2020 Annual Meeting

We announced in the spring newsletter that we would be holding our 2020 annual meeting in conjunction with the Brethren in Christ U.S. General Assembly in Kansas. Obviously, our plans changed in light of all the disruptions caused by the COVID-19 pandemic.

As of this writing, we hope to have an in-person gathering this fall, probably in Central Pennsylvania, but the specifics have not yet been determined. In light of our common experience of COVID-19, we would like to share our stories. How have you and your family responded to or experienced this situation? What happened within your church fellowship? How did people in your congregation respond to others? We would like to gather stories and compile them into a presentation for annual meeting. If we are not able to meet in person, even though that is our preference, we will compile the stories into a presentation that can be shared online in some way. If you have stories you would like to share in this way, send them to Ken Hoke at 101 Clarindon Place, Carlisle, PA 17013, or [email protected], by August 15, 2020. See also the article on page 3 about a larger project to collect stories from the COVID-19 pandemic, and watch our website and Facebook page for more information. 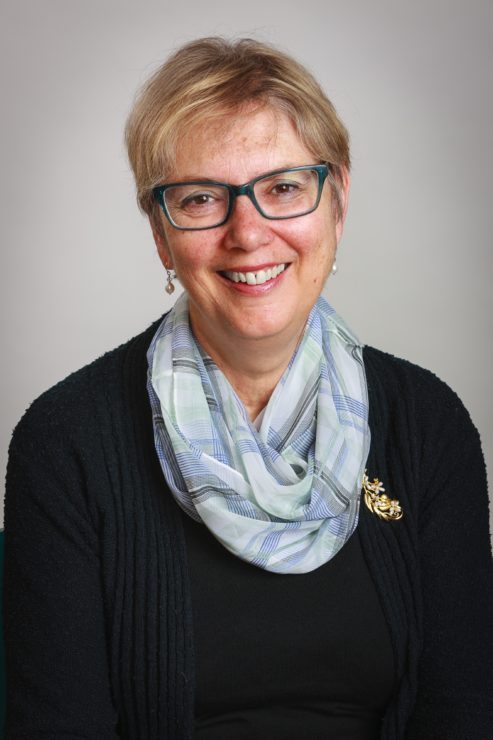 The Mennonite Historical Society of Canada (MHSC) recently presented their 2020 Award of Excellence to Lucille Marr for her contributions in research, writing and teaching. Through her work she has furthered understanding of the history of Mennonites and Brethren in Christ in Canada. The Award of Excellence is given to a person who has made a significant contribution to the advancement of Canadian Mennonite history by way of research, writing, organization, or the dissemination of Mennonite historical knowledge.

Lucille was born and raised in Ontario in a Brethren in Christ family. She studied history at the University of Waterloo, where she went on to graduate studies in Canadian church history and received her PhD. For almost 20 years, she taught history and women’s studies at Augustana University College in Alberta. She moved to Montreal, Quebec in 2001, where she served as pastor at Mennonite Fellowship of Montreal for 10 years. Her pastoral ministry included working with students, both in the congregation and at McGill University where she taught courses in Canadian church history and women in the Christian tradition for the Faculty of Religious Studies and the Montreal School of Theology. In 2013, her ministry shifted from congregational ministry, when she was appointed chaplain and academic dean at The Presbyterian College, Montreal, also part of the Montreal School of Theology. She also teaches church history and women’s studies at the college and continues as an adjunct professor at McGill.

Since 2004, Lucille has been a member of the Mennonite Historical Society of Canada, serving for many years as secretary and then as president from 2013-2016. She has also served as president of the Canadian Society of Church History. Along with publications in a variety of Canadian historical journals including Journal of Mennonite Studies, she contributes to Brethren in Christ History and Life. In these and other contexts, she has given voice to the historical lives of Mennonites and Brethren in Christ, including women, of different eras and addressed challenging topics such as Indigenous issues, mental illness, and historic peace traditions. She is the author of The Transforming Power of a Century, a history of Mennonite Central Committee Ontario, and Alice Snyder’s Letters from Germany (co-authored with her daughter Dora-Marie Goulet) about an MCC worker in post-war Germany. Her recent historical interests include Mennonite Brethren women’s groups in Quebec and Brethren in Christ mission work in Zimbabwe.

In lieu of our traditional Annual Heritage Service in person at the Ringgold Meetinghouse this year, we held a Facebook Live event. Dr. John Yeatts, professor emeritus at Messiah College, explored historical and contemporary Brethren in Christ attitudes toward political and social engagement—a timely topic in this U.S. election year. The entire presentation is available on YouTube, and will also be published in the August 2020 edition of Brethren in Christ History and Life.

Many Historical Society members will know the name Ravi Zacharias. A renowned Christian apologist and author, Zacharias died on May 19, 2020, after a short battle with cancer. What many Society members may not know is that Zacharias’ conversion to Christian faith was the result of the evangelistic preaching of a Brethren in Christ minister and former bishop—the late Samuel Frey Wolgemuth (see photo)

Wolgemuth—born in Lancaster County in 1914—was the son of Graybill Wolgemuth, a long-time chair of the church’s Foreign Mission Board, and Cecelia (Frey) Wolgemuth. Influenced by his parents’ involvement with the Brethren in Christ’s work overseas, as a young person Sam developed a passion for missions. After graduating from Messiah Bible College and Taylor University and marrying Grace Dourte in 1938, Sam agreed to help re-start a shuttered Brethren in Christ congregation on Fairview Avenue in Waynesboro; his dynamic preaching, innovative style, and youthful energy not only grew the small congregation but also revitalized the whole Ringgold District, leading to his appointment as bishop of that church cluster in 1943. But Sam never lost his passion for missions.

In 1949, while attending a summer refresher course at the Winona Lake School of Theology in Indiana, Sam encountered the evangelical agency Youth for Christ, whose mission focused on introducing young people to the Christian faith both in the United States and around the world. Captivated by this vision of world evangelization, Sam and Grace started attending Youth for Christ events, such as the organization’s annual national convention in Winona Lake, Indiana, and its regional conventions in Ocean City, New Jersey. In late 1950, Sam participated in a three-month, world-wide evangelistic mission with Youth for Christ, visiting countries such as Japan, China, and India. Two years later, he took a leave of absence from his bishop duties and moved his wife and family to Tokyo, Japan, where he served as Youth for Christ’s regional representative for that country and, in that capacity, helped to organize its 1952 World Congress on Evangelism. Because of Wolgemuth’s leadership of that event, several North American Brethren in Christ ministers and bishops—including Henry Ginder, Erwin Thomas, and others—participated in the World Congress, reinforcing the church’s fledgling missionary work in that country.

In 1955, Wolgemuth officially joined the Youth for Christ organization as deputation director and, a year later, as vice president for the overseas program. His work took him around the world, preaching and working with national leaders in scores of countries. Eventually, in 1965, Sam was elected Youth for Christ’s fifth president, a position he held for eight years. Throughout this time, he retained his ordination in the Brethren in Christ Church, and remained the non-residential bishop of the Ringgold District until the church’s administrative reorganization into regional conferences in 1957.

In the early 1960s, during his time as Youth for Christ’s overseas program VP, Sam was on a routine trip to visit the organization’s work in India when he agreed to preach at a youth rally in a hot, crowded auditorium in Delhi. Little did he know that in the audience that night was a teenage spiritual seeker named Ravi Zacharias. The apologist later described the service and Sam’s preaching in his book, Walking from East to West:

I remember very clearly the speaker that night. He was quite different from the . . . speaker [I had heard at a previous Youth for Christ rally], with not quite as dynamic a personality. There was a calmness about him and a saintliness to his demeanor. This man delivered his sermon in measured tones, carefully, deliberately, as if laboring to get across what he wanted to say. He was speaking on John 3:16: “For God so loved the world that He gave His only begotten Son, that whosoever believes in Him shall not perish but have everlasting life.” At this point, it was more the man than the message that was getting through. I was truly drawn to him. He seemed so authentic, so caring. The message in parts was almost penetrating my soul. . . .

When he finished, he invited anyone who wanted to know Jesus Christ to come forward. I raised my hand—the only hand in the whole place to go up. About that time, a song began, with a group of young people singing. I rose from where I was sitting and made my way to the front of the auditorium.

Zacharias’ prayer that night began his journey of faith—a journey that would blossom over the years as he moved from his homeland of India to Canada and, eventually, around the world as a sought-after speaker and writer. And all of it thanks to the calm, deliberate, and sincere presentation of the Gospel by a Brethren in Christ minister and bishop from rural Pennsylvania!

COVID Chronicles: Documenting the Church’s Response to a Global Pandemic

The COVID-19 pandemic had an undeniable impact on the United States this year. Tragically, thousands of lives have been lost as a result of the virus, with many thousands more infected. In addition, state and federal mandates have transformed—sometimes radically—the way that numerous municipalities, schools, businesses, and other institutions have operated. Churches have been among those institutions most affected by the pandemic.

With stay-at-home and social distancing guidelines in effect in many states, routine church activities—such as congregational worship, Christian education, small group gatherings, and more—shifted into a virtual environment. Other forms of ministry, including service and outreach ministries, were similarly impacted by the virus and efforts to curb its impact, changing the way they have been carried out. Brethren in Christ congregations throughout the United States have not been immune to these pandemic adjustments.

In an effort to document the changes wrought by this unprecedented national disaster, this summer the Brethren in Christ Historical Library and Archives launched “COVID Chronicles,” a digital collecting initiative. This ongoing digital project seeks to collect and preserve experiences and responses from Brethren in Christ individuals and communities during the pandemic. We invite pastors, bishops, church board members, and laypeople to share anything that bears witness to their personal experiences, or that documents the activities and responses of your church community. 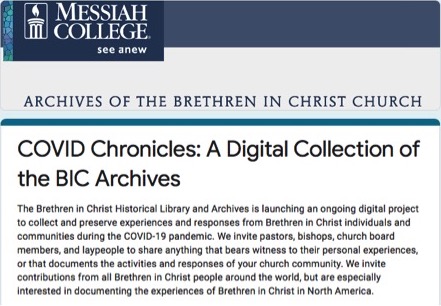 You can find the COVID Chronicles online portal online. How might you participate in this digital collecting initiative?

All submissions must be original works that you are willing to share with others, while still retaining copyright.

If you have questions about this initiative, feel free to reach out to the Archives. 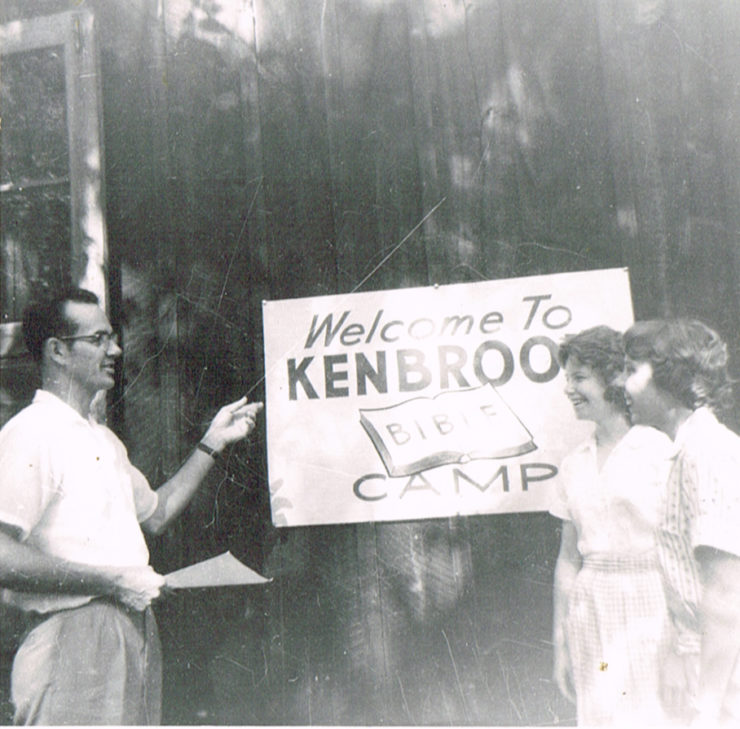 Summer camps have been part of the North American Brethren in Christ experience for more than fifty years. Places like Camp Kahquah (in Magnetawan, Ontario) and Kenbrook Bible Camp (in Lebanon, PA) have offered children and families opportunities for outdoor recreation, meaningful fellowship, and spiritual refreshment for decades. And though camp will look different this year due to the COVID-19 pandemic, these ministries remain a vital part of church life. 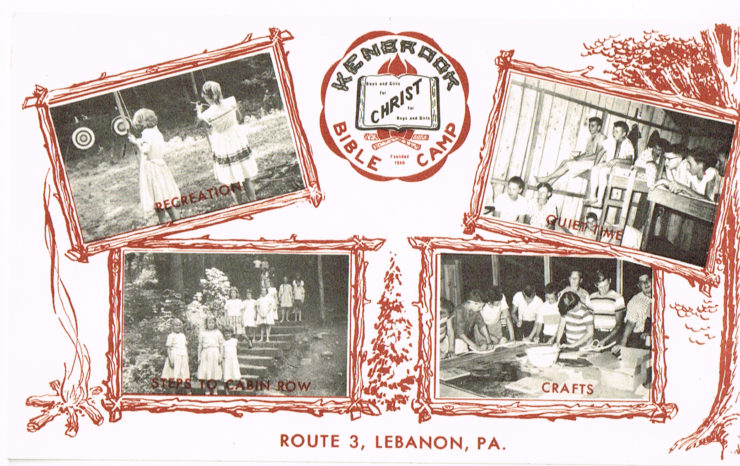 This undated postcard, likely from the 1950s, showcases the first Brethren in Christ summer camp, Kenbrook. Founded in 1949, the camp was dedicated to “making Christ known to youth, and ministering to spiritual, social, mental, and physical needs.” It held its first session in July 1950, with eighty-six children and youth in attendance, and its program included everything depicted on the postcard—recreation, crafts, and quiet time—as well as Bible study and instruction on what staffers called “practical Christianity.”

To learn more about the camp and its history, check out E. Morris Sider’s book Beyond Our Dreams: The Story of Kenbrook Bible Camp. 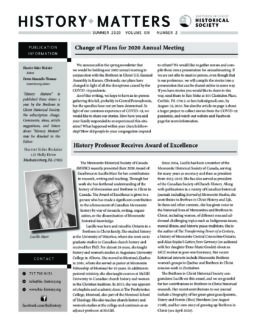