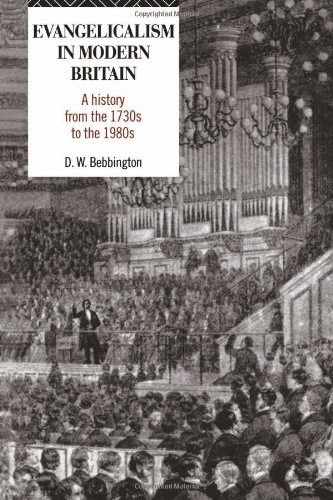 A week or so ago, I posted a link to John Fea’s blog The Way of Improvement Leads Home, in which the Messiah College historian shared some thoughts on the definition of the term “Evangelicalism.” And even though I posed the question, none of my readers shared their thoughts on the other characteristics they might add to the term.

I’d encourage you to read the posts in their entirety. In the first two, leading historians of religion — including Darren Dochuk, Molly Worthen, and the indefatigable Mark Noll — share their thoughts on the so-called Bebbington Quadrilateral, a four-part characterization of Evangelicalism first developed in his 1989 book Evangelicalism in Modern Britain that has become a standard definition in historical communities.

In the third post, scholars of American religion reflect on the significance of Mine Eyes Have Seen the Glory, a kind of travelogue of religion scholar Randall Balmer’s “journey into the Evangelical subculture in America” (as the book’s subtitle declares). All of the scholars point out how Balmer’s more journalistic account of Evangelicalism in America differs from the more scholarly treatments (by people like Bebbington). A different understanding of Evangelicalism, they suggest, emerges when the concept is examined “in real life” rather than from a scholarly distance.

The posts are so full of rich insights that it’s hard to recap them in a post such as this!

Nevertheless, this excerpt might entice you to read the posts in their entirety:

For example, the college where I teach–Messiah College–is certainly evangelical in essence, but it is also diverse enough–both in terms of student body and faculty–that it does not seem to identify with “evangelicalism” in the way that a place like Wheaton College might identify with the term or the movement.  While some of our students and faculty might find a theological and ecclesiastical genealogy in the organizations and churches affiliated with the National Association of Evangelicals or Christianity Today or Billy Graham, others come from Anabaptist, Pentecostal, theologically conservative or moderate mainline Protestant, or even Roman Catholic backgrounds. Messiah is a very evangelical place. It strongly adheres to the authority of the Bible, the belief that Christians should be sharing their faith and addressing social problems, the centrality of the Cross, and the need for conversion (although not everyone would completely endorse a belief in the New Birth). But is it part of a movement known as “evangelicalism?” Maybe.

Readers: What do you think of these attempts to define (or re-define) “Evangelicalism”? Share your thoughts below!

« The 2014 Annual Meeting of the Brethren in Christ Historical Society
Rethinking Church Membership: Reflections on the 2014 Sider Institute Study Conference »

One response to ““What Is an Evangelical?” (Redux)”