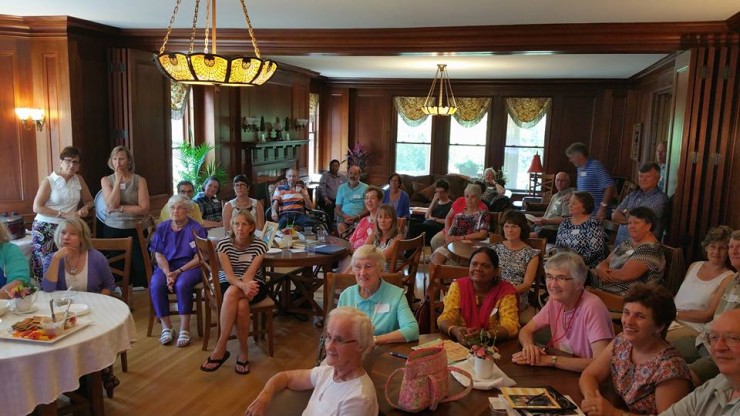 This past August, about forty-five people gathered at the beautiful Inn at Ragged Edge near Chambersburg, Pennsylvania, for a reunion of people associated with Youngways Hostel, the former home for missionary children in Bulawayo, Rhodesia (now Zimbabwe). Former missionary kids (MKs), their spouses, and many of those who were entrusted with their care gathered for an afternoon of renewing friendships and reminiscing together about their shared past. Now in their fifties and sixties, these MKs all spent one or more years at Youngways during their parents’ missionary service in Zimbabwe and Zambia in the 1960s and 1970s. Check out the photo to the left; how many people can you name?

As someone who could have been but wasn’t a charter member of Youngways, I attended the reunion with my husband. Youngways Hostel opened in 1960, with Pete and Mim Stern as missionary houseparents, Martha Long as a voluntary service assistant, and seven MKs, including my younger brother Rich. (One more child joined later that year when his family returned from furlough.) Prior to the opening of Youngways Hostel, most MKs were sent off to British boarding schools. In 1960, because I had only one more year of elementary school left at a boarding school in Choma, Northern Rhodesia (now Zambia), my parents decided to let me finish there before heading to Youngways to start high school in 1961. So I lived at Youngways just one year before our family returned to the United States at the end of 1961. In its heyday, there were more than thirty MKs living at Youngways while they went to neighborhood schools in Bulawayo.

At the reunion, each of the hostel kids introduced him or herself and gave a brief summary of his or her life since Youngways. When it was my turn, I put on my Historical Society hat for a moment to make a plea for someone to consider writing the “definitive” history of Youngways. One person had collected old photos into a slide show that was running continuously throughout the reunion, and there were lots of scrapbooks, photograph albums, and old Youngways newsletters available to peruse. The history is there, just waiting to be told in a more organized way for future generations before key people are no longer available to fill in the details.

Later, several of us chatted a bit more about how such a history could and probably should also include the more general topic of the education of Brethren in Christ missionary kids. Furthermore, it should paint not only the more positive picture that tends to dominate reunion reminiscences, but also describe the more negative things some MKs endured, the difficult decisions their parents had to make about their education, and the toll all of this sometimes took on missionary families. To be complete, a history that starts with the Youngways Hostel years, which were formative in many ways for MKs of the 1960s and 1970s, should be placed in context.

For example, my own family’s experience was not unique. Over the course of my parents’ fifteen years of missionary service, my brothers and I experienced five different kinds of missionary kid education: homeschooling (all three of us), government boarding school (my older brother and I), leaving a child in North America to finish high school and attend college (my older brother), Youngways (my younger brother and I), and American schools where we were the temporary “newbies” (my older brother and I during furlough). My brothers and I did not experience the worst that boarding school had to offer and we have many positive memories. However, we can also tell more negative stories, and we experienced the pain of separation from our parents and each other (in my older brother’s case, for six whole years while he was in North America and we were in Africa). Many missionary families could tell very similar stories.

In 1979, Beth Frey, a former MK and missionary in Zimbabwe for many years, wrote her master’s thesis on “Children of Brethren in Christ Missionaries and Their Adjustment to Life.” In 1998, for an issue of Shalom! celebrating the 100th anniversary of Brethren in Christ World Missions, I conducted an informal (and completely unscientific) survey of former MKs about their MK experience. I’ve also written several short personal reminiscences about MK life that I published on my own blog, “Pieces of Peace” (see “Boarding School and Rheumatic Fever,” “Boarding School Memories, Part 1,” and “Movies and Midnight Feasts: Boarding School Memories, Part 2”).

Who will add to this small body of writing about the history of Brethren in Christ missionary kids and their education, especially within the context of Youngways Hostel? It’s a great story waiting to be told!