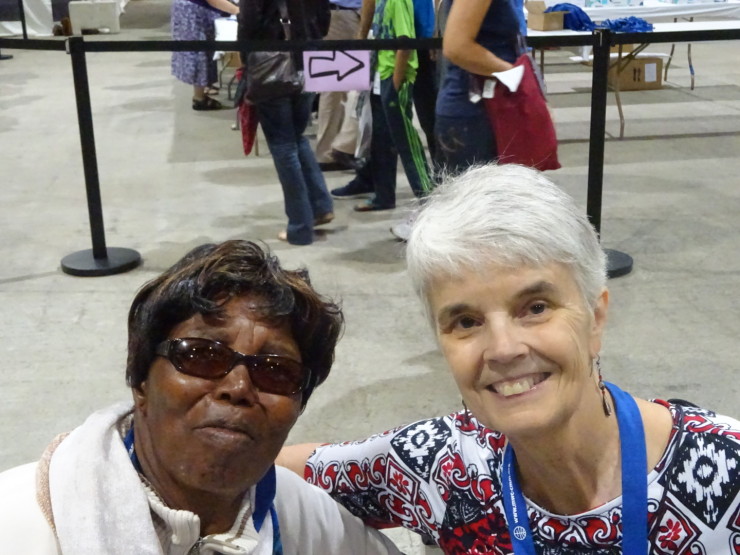 The name Makanalia is one I’ve known for almost as long as I can remember. My father (Lewis Sider) had a very special relationship with this woman he first met in 1954 when she was a young girl living in her rural village in Southern Rhodesia (now Zimbabwe) and he was out visiting village schools. In his missionary memoirs, he describes noticing a girl sitting in the front row who had difficulty seeing the blackboard. He says, “Somehow, I developed a feeling that she needed special help and also I had the conviction that she had real ability…. I don’t remember just how I was prompted to take her to the mission or just what the circumstances were that caused her parents to give permission, but…permission was given, and she agreed that she would go with me.”

Twelve years ago, when I was in Bulawayo, Zimbabwe for the Mennonite World Conference global assembly, I met Makalania Dhlamini. This was just a couple months after my father had passed away, so it was particularly poignant for me to hear her profuse thanks for what he had done for her so many years before. I didn’t really understand then the depth of her gratitude, and little did I know then that I would see her again – on my home turf at the assembly in Harrisburg, Pennsylvania.

When we happened upon each other the first day of the assembly, she gripped my hand tightly and held on as we greeted each other. Again, she expressed her profound thanks for what my father had done. As we talked, I asked her to tell me the story I had often heard before but never from her. There were details that differed from my father’s account in his memoirs, but the basic outline was the same. One of the questions I’ve had for a long time was why her family was willing to let her go off with the white missionary, not knowing if or when she would ever return. Her answer was simple: “They trusted Umfundisi Sider; they trusted the missionaries.” (Umfundisi is a term of respect.)

She also talked about what my father did as a miracle. She remembered that the rural roads (if they could even be called roads!) were often muddy and impassable, and frequently Dad’s car would get stuck in the mud. I have vague memories of my mother back at the mission station worrying about where he was when he didn’t get home at the appointed time. In his missionary autobiography, Dad tells of one particularly memorable time of being hopelessly stuck in the mud, which may be the incident I vaguely remember. This time, however, when he was taking Makanalia with him back to mission station, there were no problems.

While that was perhaps a miracle on a smaller scale, the real miracle for Makanalia was that she was eventually able to get glasses for her poor eyesight, earn enough money from working to pay her school fees, attend school, and receive a teaching certificate. In his book, Dad describes her accomplishments: “She has been a teacher for many years,… [including being] a teacher of special education for the handicapped in Bulawayo…. She has helped to start both the Lobengula and the Bulawayo Central churches in Bulawayo. She has been a wonderful wife, mother [of four children], teacher, and example of Christian character and leadership.” All these accomplishments would not have been possible had my father not been moved by her plight all those years ago, and “fetched” her from her village, to use Makanalia’s word.

I still don’t think I quite grasped the depth of her gratitude until I took her to my father’s grave as she had requested. One of her main reasons for coming to the U.S. and to Pennsylvania for the assembly was to see where the missionaries had come from, and specifically to see where my father was from. On our way to the cemetery where my parents are buried, she said, “I know he’s not really there, but I want to see where his body is buried.” As we were driving up cemetery hill in Grantham, she commented, “We should have brought flowers.” I led her to the grave, and together we cleared away grass clippings that were obscuring the gravestone. She knelt down on the ground in front of the stone and asked if she could pray (watch and listen to her prayer):

“Let me pass the Word to all I come across. Help me, Lord, to love the poor, the fatherless, the orphans, those with nothing. I didn’t have anything when Lewis Sider picked me up. I had nothing. There are many in Africa with nothing, who have no school fees. I had a chance. Let me give them a chance…. I thank you, Lord. I prayed for this chance to come and thank you for their [the missionaries’] lives. I know they are waiting somewhere where we shall meet and sing together. I look forward to that day when I will see Umfundisi and tell him I am home too.”

By the end of the prayer, she was sobbing, and I was in tears as well. She finished her prayer, got up, and we started back to the car. She said again, “We should have brought flowers.” Across the way I noticed some Queen’s Anne’s lace and pink clover; I picked a few flowers and took them to her. She carefully and lovingly placed them on the gravestone. And then we left.

Just that morning at church, my Sunday school class had been discussing an article from Christianity Today entitled “The Surprising Discovery About Those Colonialist, Proselytizing Missionaries.” The author cites research showing, among other things, that “[A]reas where Protestant missionaries had a significant presence in the past are on average more economically developed today, with comparatively better health, lower infant mortality, lower corruption, greater literacy, higher educational attainment (especially for women), and more robust membership in nongovernmental associations.”

My parents’ “proselytizing” missionary service was during colonial times, before the British colony of Southern Rhodesia became the independent country of Zimbabwe. Despite their deep love and appreciation for the black people of Southern and Northern Rhodesia (where they also served), in later years their attitude toward them seemed to reflect a somewhat colonial mentality and sounded paternalistic and condescending to my more “enlightened” ears. I also know that during the war in Rhodesia in the late 1970s between loyalists to the white government and those wanting independence and black rule, some blacks criticized the missionaries for not being more outspoken against the white regime on behalf of the black majority. Plus, given the bad economic and political situation in Zimbabwe for more than a decade now, with the country that was once thriving and considered the breadbasket of Africa deteriorating in many ways, the research conclusions cited in the article could ring a little hollow. What happened? Why couldn’t the influence of the missionaries have prevented the economic and political tragedy in Zimbabwe?

Missions methods have changed since my parents were missionaries, and my own views on missions have been mixed and complicated at times. But seeing Makanalia again and hearing her genuine and deep gratitude for what my father and other missionaries did for her gave me a new appreciation for the legacy they left. During the assembly and after, I watched her interact with several retired missionaries (see photos below), and there was nothing but mutual respect and love. Another older gentleman from Zimbabwe, Knight Ngwabi, age 83, who we hosted in our home the last night of the assembly, also fondly remembered my father from more than 65 years ago. The Brethren in Christ Church in Zimbabwe, for many years now under the leadership of the indigenous people, is thriving, in part because of the sacrifice and dedication of people like my parents. It was good for me to reminded of that by people like Makanalia. 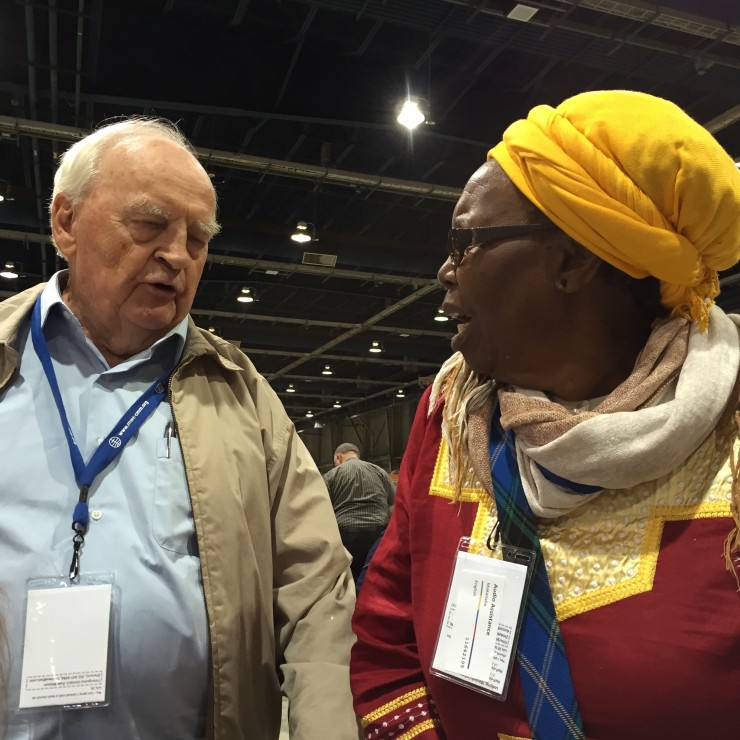 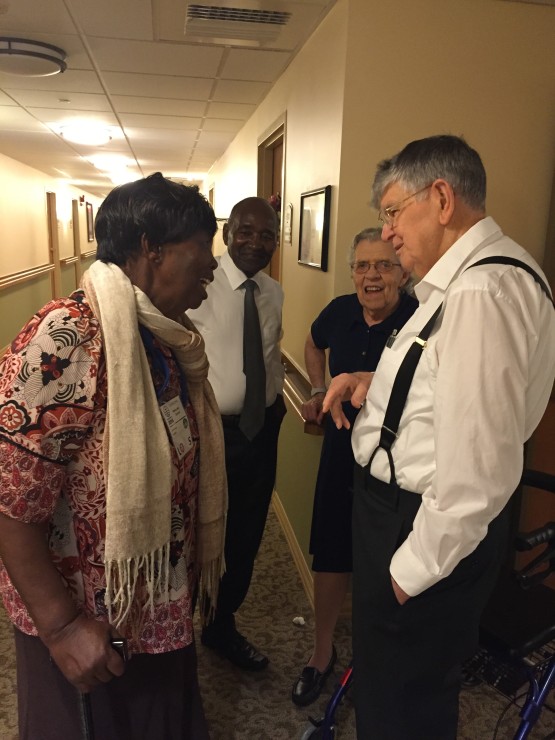 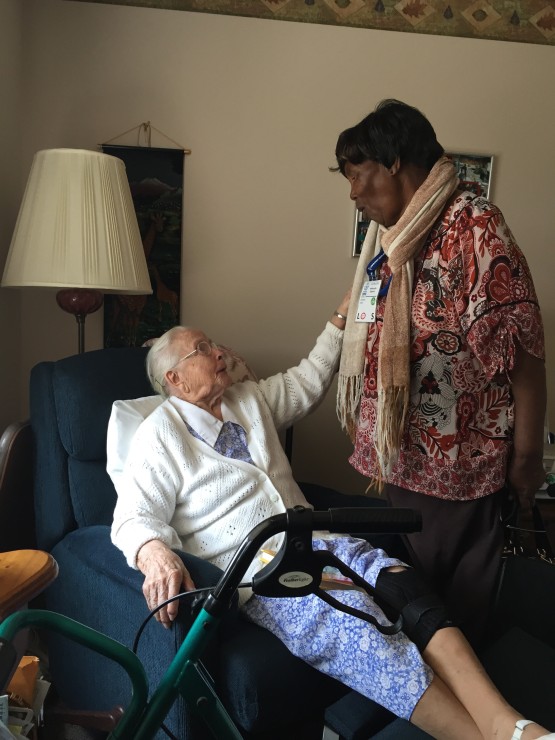 This article is republished from the personal blog of Historical Society editor, Harriet Sider Bicksler

« Traveling to Mennonite World Conference in 1957
A Story Waiting to Be Told: The Education of Missionary Kids »