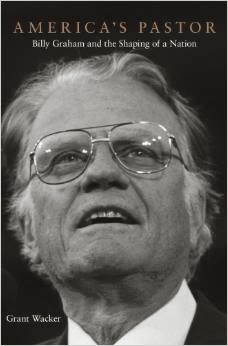 Over at The Way of Improvement Leads Home, Messiah College professor John Fea has posted an interview with Grant Wacker, a professor at Duke University and author of the forthcoming book America’s Pastor: Billy Graham and the Shaping of a Nation (Belknap Press, 2014).

Here’s a taste of John’s interview:

JF: In two sentences, what is the argument of America’s Pastor?
GW: The book argues that Graham’s success is at least partly attributable to his extraordinary ability to appropriate trends in the culture and then apply them to his purposes of personal evangelism and moral reform of the nation (and world).
JF: Why do we need to read America’s Pastor?
GW: I hope that it supplements the excellent biographical work of William Martin and others with a focus on the relation between Graham and post World War II America.

Wacker’s book, therefore, promises to tell us a great deal about a man who had an outsized influence on the theological evolution of the Brethren in Christ during the 1950s and 1960s. I hope to review Wacker’s book when it comes out later this fall, so stay tuned to the blog for more!