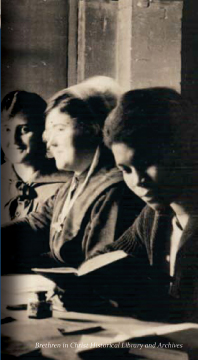 Rachel [Flowers] relocated from Florida to Boiling Springs, Pa., with her father, Harry E. Flowers, and her three siblings in the early twentieth century. She enrolled at Messiah Academy in 1916, the first African American to attend Messiah. Her brother, Vincent, would also attend seven years later. She went on to graduate in 1918. In the 1950s, Rachel likely held a civil service position, based on a letter of inquiry received by Messiah from the U.S. Civil Service Commission. Although there is much unknown about Rachel, our hope is that her presence will be remembered and that in the future her full story may be told.

That predictive “future” is here now, thanks to the pioneering work of one Messiah College history student, Christina Thomas. Thomas is undertaking an extensive research project about Flowers and documenting her findings at her blog, Diary of a (Future) Historian. Up until now, it appears that Thomas has pursued her research questions using materials available to her in the Murray Library and the College archives. Now, thanks to a generous research grant from Messiah College’s Friends of the Murray Library, Thomas will be able to travel to the Mississippi State Archives in Jackson, to conduct research in the papers of Rachel’s younger sister, Hilda Flowers. You can learn more about the kinds of materials that Thomas will be working with here.

Thomas’ research into Rachel specifically is interesting enough, but the project has unfolded so as to give a portrait of the Flowers family as a whole. Check out the blog’s “Topics” listing (on the left-hand side of the homepage) to read material about Vincent, Gladys, Chauncey, and other members of the Flowers family.

I’m looking forward to hearing more about Thomas’ research in the near future. I think she’s pursuing some questions and themes that will significantly flesh out the early years of Messiah College.

« “We Will Remember”
Brethren in Christ on the World Wide Web »