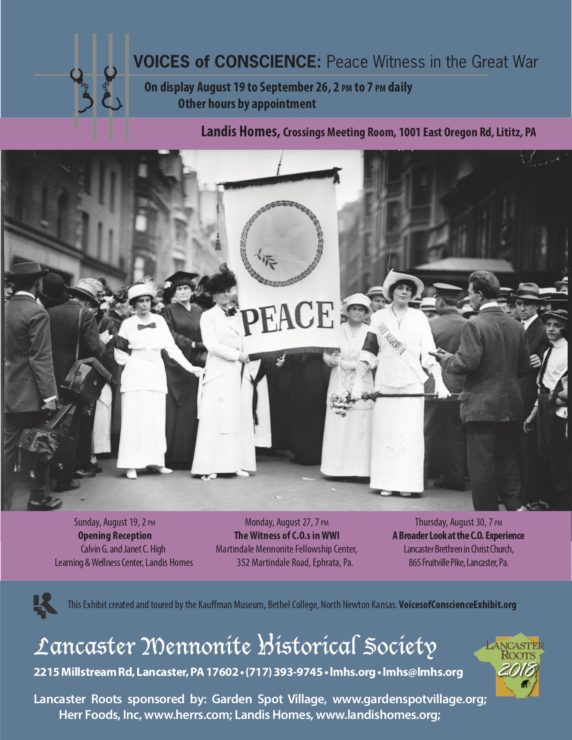 On Thursday, August 30, 2018, Beth Hostetler Mark, librarian emeritus at Messiah College and secretary of the Historical Society board, will share her grandfather’s World War I story at one of the events related to the traveling exhibit, “Voices of Conscience: Peace Witness in the Great War.” The event will be held at the Lancaster Brethren in Christ Church, 1865 Fruitville Pike, Lancaster, PA, at 7 p.m. Beth’s grandfather, E. J. Swalm, who served as a bishop in the Brethren in Christ Church, was imprisoned during World War I for refusing to enlist in the Canadian army.

From August 19-Spetember 26, the “Voices of Conscience” traveling exhibit will be at Landis Homes, 1001 East Oregon Rd, Lititz, PA. The exhibit will be held in the Crossings Meeting Room. Entrance is via the main entrance of the new Calvin G. and Janet C. High Learning and Wellness Center at Landis Homes from August 19 to September 26. It is open from 2 to 7 p.m. daily, with other hours by appointment. There will be an opening reception at 2 pm on August 19.

A century ago, the United States had just entered “The Great War.” While many wholeheartedly endorsed this effort, there were persons who could not in good conscience be involved in the killing of other humans. Often at great cost, even including death in a few cases, they spoke through their words and actions of a different path.

As Americans commemorate this anniversary, will they remember those whose peace witness challenged the call to war? “Voices of Conscience: Peace Witness in the Great War” is a traveling exhibit developed by Kauffman Museum, North Newton, Kansas, which remembers the stories of people of faith who opposed the war. The exhibit examines key questions such as: Who speaks for peace in times of war? What am I willing to fight for? Is paying for war participating in war? and Who are the voices of conscience today?

A series of educational meetings will be held alongside the exhibit, focusing on conscientious objection to war.

The traveling exhibit and related programs in the Lancaster area are being sponsored by the Lancaster Mennonite Historical Society and Lancaster Roots 2018.

More information about the exhibit and programs was in the Spring 2018 edition of “History Matters.”